I finally settled on a Hallowread for this October.  I will be rereading and posting on Dracula.  I will probably also do a post on the 1931 movie.  But I don’t plan on doing as many posts as I did for, say, Frankenstein two years ago.  Although, hey, maybe this is my chance to finally write a post on the Blade movies.

In the meantime, though, I have been reading the Del Rey collection of Robert E. Howard’s Solomon Kane stories.  They make for a pretty good Hallowread.  A few were included in the horror collection I covered last October, after all, and every story I’ve read so far includes some spooky elements. 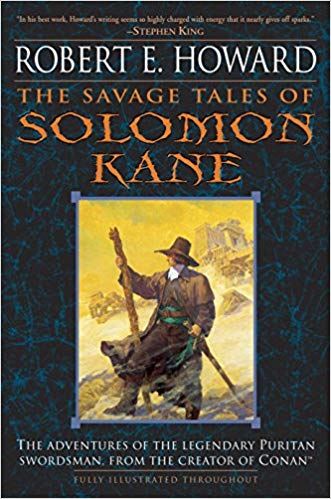 I talked about the first story in the collection, Skulls in the Stars, a few weeks ago.

The next three stories in the collection include two shorter works.  Rattle of Bones was included in the Robert E. Howard horror collection I covered last Halloween.  It was worth the reread.  The Right Hand of Doom is a nice little almost ghost story.  I mean, it is a necromancer story, not a ghost story, but it follows some of the conventions of the form.  As such, Solomon Kane is almost just a bystander.  But he is Solomon Kane, and written by Robert E. Howard, so he is still badass.  It also gives us a nice introduce to Kane:

“And you be lucky too, John, for keepin’ th’ mouth shut.  That be Solomon Kane, the Puritan, a man dangerouser than a wolf.”

The big one here, though, is Red Shadows, the first Solomon Kane story ever published and one of his marquee stories.  It introduces not just Kane, but also the African juju man N’Longa, one of Howard’s great characters (I met him in the story Hills of the Dead from the horror collection).

The precipitating act for the events of Red Shadows is the rape and murder of a child.  What was Fletcher Vredenburgh just saying about grimdark?  Howard writes some damn fine curses and epic speeches, but Solomon Kane’s fury runs cold.

Slowly he rose, mechanically wiping his hands upon his cloak.  A dark scowl had settled on his somber brow.  Yet he made no wild, reckless vow, swore no oath by saints or devils.

“Men shall die for this.” 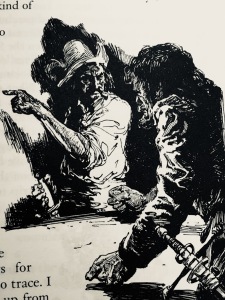 He then proceeds to slaughter an entire bandit crew.  The bandit leader, Le Loup, proves a more difficult foe.  Kane chases him for years and across continents, finally bringing matters to a bloody, bitter close in darkest Africa.

Another three more than solid stories from Howard.  I’m very pleased that I chose to start this collection as the commencement of autumn.  There is a bite of a cold, bitter wind and the smell of seasonal death about every story.  Solomon Kane is one of Howard’s great characters, of a sort we simply don’t see today.  And a writer planning a flintlock fantasy would do well to freshen their work by looking to the subgenres beginnings here.