It has been awhile since I’ve done one of these.  So long, in fact, that I am pretty sure I watched all of these movies before no-angel was born, and she is six months old now.  But I haven’t been to the theater since Infinity War, and I’ve been watching a lot more non-SF (including Die Hard knock-offs Under Siege and Sudden Death). 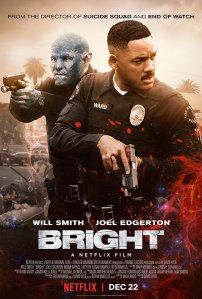 Bright is an incredibly 90s film.  What could be more 90s than mashing up buddy cop flicks, the fantasy racism that was stock-in-trade for 90s Tolkien imitators, and the heavy and obvious influence of 1997’s The Fifth Element?  The first two elements can’t help but feel stale.  Surprisingly, it is the earnest performance of Joe Edgerton as Will Smith’s orc partner that makes that part work as well as it does, not Will Smith’s performance.  The Fifth Element-inspired elves are much more interesting, and make for some of the best action set pieces anywhere. 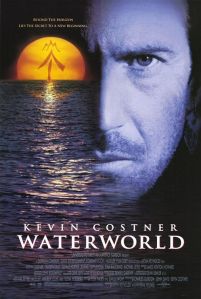 The biggest problem with Waterworld is that it isn’t The Road Warrior.  Forget that it is a Mad Max knock-off (and, uh, that Kevin Costner drinks his own urine), and the movie stands just fine on its own.

Pretty much all Assassin’s Creed has going for it are the action scenes, and those are marred by constantly cutting to shots of Fassbender flailing around.  Everything else is bad, but the biggest problem is the extraordinarily abrupt ending.  And I recognize this is a silly movie based on a video game that starts with the premise “actually the Islamic murder cult was good,” but the idea that we are less free now than hundreds of years ago almost gave me an aneurism.

The plot and every character are underdeveloped.  The only thing the movie properly develops is the worldbuilding.  Tom Hanks and Karen Gillen are very good, Emma Thompson is good, John Boyega is badly miscast, and no one else has enough to work with.  The idea for The Circle may have been fresh when Dave Eggers wrote the novel in 2013.  By now it is banal.

Blogs on books at Every Day Should Be Tuesday (speculative fiction) and Hillbilly Highways (country noir and nonfiction). https://everydayshouldbetuesday.wordpress.com/ https://hillbillyhighways.wordpress.com/
View all posts by H.P. →
This entry was posted in Sundry and tagged Movie Reviews, Short Review Roundup. Bookmark the permalink.