One of the high-level changes that separates modern speculative fiction from the old stuff is the balkanization of science fiction among hard science fiction, social science fiction, and adventure fiction.  You know that wasn’t always so, but the brain still wants to categorize based on the immediate examples to come to mind, so you wind up categorizing that old book anyway, usually as adventure fiction.  Nobody would write about a hard science fiction novel today about a guy trying to fly to Mars on a privately financed (and unregulated) space mission and landing on Venus by accident—and finding full civilizations when he got there.  Nor would modern social science fiction likely come at things from the same way, if only because certain views on society and anything that smacks too strongly of fun are well out of fashion.  Burroughs, though, bird-men and dog-crabs notwithstanding, takes the science and the society seriously.

And so Pirates of Venus tells the story of Carson Napier, who sets course for Mars, hits Venus, and underneath two levels of cloud cover finds vast societies of near-immortal very human-like peoples along with the aforementioned bird-men, dog-crabs, and some mean-ass giant spiders.

(Scheduling Note:  I have a full set of Burroughs’ Venus series, and very much look forward to reading the rest of it, but not just yet and I probably won’t post anymore.  There doesn’t seem to be much point to do reviews for each.  I will get a post up next week on George R.R. Martin’s Old Venus anthology, specifically comparing and contrasting it with Pirates of Venus.  My next Vintage SF read is Double Star by Robert Heinlein, but I will post on Manly Wade Wellman’s Silver John stories and Sterling Lanier’s Hiero’s Journey in the next several weeks as well.  Skelos finally invoiced me for shipping, so I hope to get a review of issue #1 up relatively soon as well.  I also have an advance copy of Women of Futures Past coming that I am very excited about, and I will try to get a post up the week of publication.) 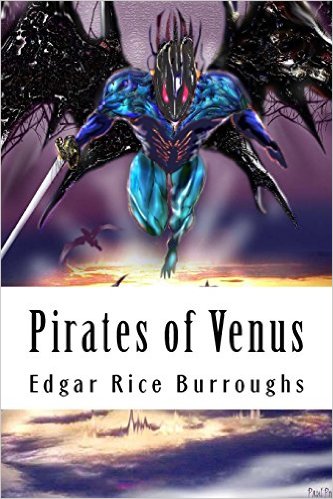 I was immediately struck by the framing story.  Carson approaches a man who appears to be none other than Burroughs himself through a mysterious letter.  After providing both his own telepathic bonafides and Burroughs’ spiritual compatibility via spectral projection, Carson hires Burroughs as scrivener for his one-way trip to Mars, diary entries to be provided by telepathy.  (Burroughs manages to squeeze in a fair amount of pathos as to why Carson is willing to sacrifice his life for scientific exploration.)  I was mildly surprised to see Burroughs reference Tarzan and Pellucidar, and probably John Carter as well—I hadn’t realized all the Burroughs tales took place in a shared universe.  (I was much more surprised to see a reference to “trust deeds, receivers in equity, and deficiency judgments” in an adventure yarn—another reminder of Burroughs’ previous, highly successful creations.)

I was again struck by how seriously Burroughs takes getting to Venus.  The basic concept—man tries to get to Mars in privately funded rocket, lands on Venus by mistake—is so silly you expect it to be treated as such.  Burroughs plays it straight.  He has a good reason for setting Carson’s initial sights toward Mars, I think—presumably that there was hope at that time of life on Mars but we had already given up hope for Venus.  Carson would have been crazy to start his search there.  And he gives a depressingly plausible reason for screwing up the rocket’s trajectory.  Carson, the physicist he hires, and the astronomer he hires check and double check the math.  It’s right, with the rather large exception that they failed to account for the Moon.  Whoops.  Getting the minutia right but failing to account for a large, important variable?  It happens.  The point is that it’s almost hard science fiction.  That’s a good thing in my book not because I care about the science—which even if it was cutting edge at the time is certainly long since out of date and proven wrong—but because it’s good worldbuilding.  Burroughs doesn’t take even the first step for granted.  This is a problem with some of the newer Retro SF.  The authors know the science is moot and assume readers who are going to pick up something like that don’t care so they wind up treating it in a way that’s silly and, worse, boring.

The entire sequence is surprisingly drawn out, and Burroughs manages to imbue it with a great deal of suspense and creeping terror given the reader can pretty well guess from the title Carson will survive to land on Venus.  Carson also engages in a little gallows humor, neither the immense distance to Alpha Centauri or the incredible heat of the center of the Sun concern him, on account that he would be long dead before reading either.  (Carson’s sardonic wit pops up frequently throughout.)

Also on the hard, or quasi-hard sci fi front, the natives also wield weaponry using radiation (this is pre-atom bomb, mind you). 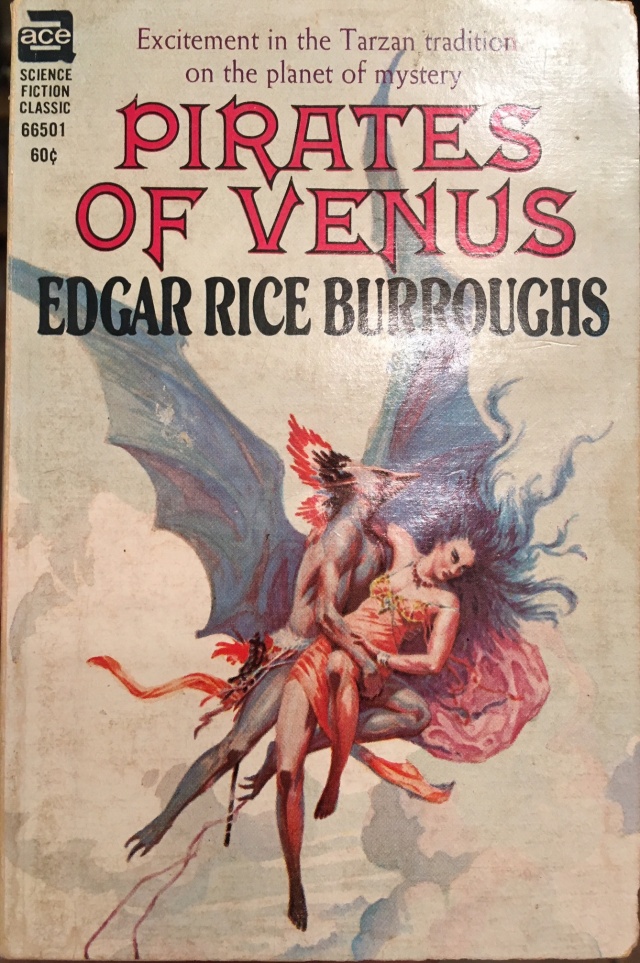 Carson finds a rich society on Venus.  The human-appearing Vepajans that find him are, notwithstanding their scant clothing and settlement high in 5,000 foot trees, scientifically and societally advanced.  The former has given them almost unlimited lifespans.  The latter gave them a class-based but utopian society.  At least it had until “the lazy and incompetent” were led in a bloody Thorist uprising by leaders whose “aims were solely selfish.”  The Thorist uprising is almost certainly heavily based on Communism, but this was pre-Chinese Communist Revolution, pre-WWII, and pre-Cold War.  Burroughs may have had an eye of the rise of fascism and national socialism in Europe as well.  Dissidents to the uprising have escaped to their Taiwan in the trees.  They did learn one thing from the revolution—their updated society has dispensed with even “slight class distinctions.”  Things turned out for the pawns of the Thorists about as you would expect, as history has since taught us they always will:

[T]hey are all reduced to virtual slavery.  An army of spies watches over them, and an army of warriors keeps them from turning against their masters; they are miserable, helpless, and hopeless.

There is also the inevitable problem that they have slaughtered, driven off, or disincentivized the most productive members of society.  Hence the need to live in the trees, to hide from Thorist raiding parties intent of reimporting knowledge and skill.  Written two decades earlier, the whole thing has a sort of sequel to Atlas Shrugged feel to it.

Pirates of Venus was my first Burroughs.  I inevitably came in with certain preconceptions about a guy who published dozens and dozens of books going back over one hundred years ago, who is routinely looked down upon today, and who never had any literary pretentions to begin with (“I think I love books, though God knows I am about as far from being high-brow as one can get and yet pass the literacy test.” – Edgar Rice Burroughs).  Burroughs prose isn’t the dumbed-down prose of modern YA but nor is it florid or purple.  It can, at times, be quite beautiful:

I returned to the porthole.  The Moon lay just ahead and a little to the left.  It was no longer a great sphere; it was a world that filled my whole range of vision.  Against its black horizon I saw titanic peaks; below me huge craters yawned.  I stood with God on high and looked down upon a dead world.

Things get to a bit of a slow start—the pacing of the period immediately after Carson’s crash landing are my only real complaint—but about halfway through really get going.  There are fights and derring-do.  There is, of course, a dame.  Who is, of course, a princess of Venus.  No shrinking violent, though, on meeting Carson she immediately slaps him in the face and pulls a knife on him (“like a tigress”).  She has a point.  To his discredit, Carson is more than a bit of a jackass.  To his credit, he has some self-awareness of this.  It’s a rich world.  There are the aforementioned 5,000 foot trees that rise like mountains in the distance viewed from one of Venus’ oceans.  Not a place where you would want to fight giant spiders (I don’t know if Tolkien read Burroughs, but it wouldn’t surprise me if his giant spider encounters owed quite a bit to the depiction here).  As the title suggests, Carson eventually finds his way to the seas of Venus, and we get swashbuckling piratical exploits.  Bird-men feature as heavily in the plot as they do on every cover I’ve seen.  (I’m not here to do the sort of cultural anthropological yeoman’s work that Jeffro did with his series, tracing the literary roots of early D&D, but it’s hard not to see the inspiration for the the aarakocra in Burroughs’ bird-men, right down to the hollow bones.)

The aarakocra as depicted in the 2ed Monstrous Manual.

I very much enjoyed Pirates of Venus and very much look forward to devouring the rest of the series.  And if this is Burroughs at his worst, which seems to be the consensus, then I really look forward to reading some of his other work.

Jeffro on Pirates of Venus at Castalia House.

James Maliszewski on Pirates of Venus at Grognardia.

Ryan Harvey on Pirates of Venus at Black Gate.

Steven H. Silver on Pirates of Venus at SF Site.

Movie Mike on Pirates of Venus at Mike’s Movie Cave.

Blogs on books at Every Day Should Be Tuesday (speculative fiction) and Hillbilly Highways (country noir and nonfiction). https://everydayshouldbetuesday.wordpress.com/ https://hillbillyhighways.wordpress.com/
View all posts by H.P. →
This entry was posted in Book Reviews, Science Fiction, Throwback SF and tagged Appendix N, Sword and Planet, Vintage SF. Bookmark the permalink.