Summer of Conan: Howard’s True Successors are in Post-Apocalyptic Fiction, not Epic Fantasy

Hither came Conan, the Cimmerian, black-haired, sullen-eyed, sword in hand, a thief, a reaver, a slayer, with gigantic melancholies and gigantic mirth, to tread the jeweled thrones of the Earth under his sandalled feet. 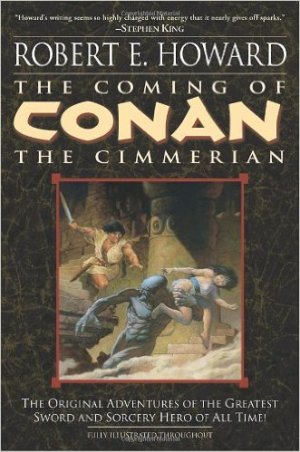 The first volume of Del Rey’s three-volume collection of Robert E. Howard’s Conan stories is my introduction to Howard and almost my introduction to Conan.  The Del Rey editions collect the stories in the order that Howard wrote them rather than by publication date or plot chronology.[1]  The first book includes a foreword by Mark Schultz and an introduction by Patrice Louinet.  Both are excellent, neither denigrating the source material.  Louinet is the editor, and Schultz contributed extensive illustrations (I understand these are missing from the Kindle version).  He is no Frazetta—no one is—but I like Schutlz’s artwork a lot, and I find it supplanting Frazetta and the Ah-nold movies in how I picture Conan and his world.  They do tend to be a little spoilery.  The first volume also includes drafts, synopsizes, and, most notably, Robert E. Howard’s fictional history of the Hyborian Age.

The stories in this volume are shorter than the stories in the other two volumes.  I’m not going to review each, or even the volumes as a whole, really.  You’ve probably read the Howard stories and Jeffro’s Retrospective post (if you haven’t, stop reading this and do both).  I will save the reviews for the pastiches, but I do have plenty to say about Howard’s stories.  I will have a whole lot to say about Conan before it is all said and done.

The dichotomy Howard draws between barbarianism and civilization is oft remarked on by commentators, not the least because Howard himself quite plainly lays it out.  But there is more to it than a cursory, simplistic interpretation might imply.  My impression of Conan was sealed by two of the first four stories—The God in the Bowl and The Tower of the Elephant.

In each, Conan is a young thief.  He doesn’t wear his role as a barbarian in civilized lands as comfortably as he does as an older man.  This is a Conan who reacts to his discomfort with civilized society with anger and violence.  In The God in the Bowl, Conan is loath to admit he came to the Temple to steal, but he reacts viciously when the watch thinks to seize him.

“Back, if you value your dog lives!” he snarled, his blue eyes blazing.  “Because you dare to torture shop-keepers and strip and beat harlots to make them talk, don’t think you can lay your fat paws on a Hillman!  I’ll take some of you to hell with me!  Fumble with your bow, watchman – I’ll burst your guts with my heel before this night’s work is over!”

In The Tower of the Elephant, Conan naively asks about the tower, brazenly declares he could burglarize it, and then kills the man for laughing at him.

It is not the loincloth that makes the barbarian.

Howard wove tales more distinctively American than George R.R. Martin, who sometimes gets called the American Tolkien.  Howard’s are the true rivals to Tolkien’s English tales.  The Hyborian Genesis essay from the Appendices suggests Howard conceived of Conan while wandering the Texas-Mexico border, with his “main occupation being the wholesale consumption of tortillas, enchiladas and Spanish wine” (Howard’s words, but after my own heart).  His fictional history of his created epoch, The Hyborian Age, shows a rich appreciation for the often-bloody flow of people over time.  Too little fantasy does.  Howard, though, had the benefit of being from Texas.  The flags of six different sovereigns famously flew over Texas over the course of just a few hundred years.  The southern border has always been porous.  At the time of the Texas Revolution, the Comanche probably still outnumbered both Anglo and Tejano Texans, and controlled more of Texas, including Howard’s future home. 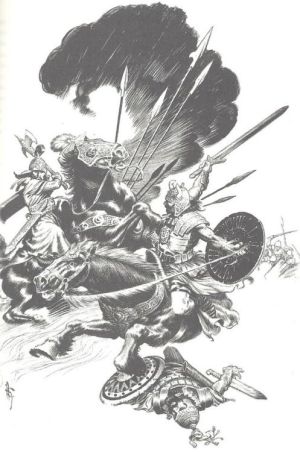 Howard’s true successors may not be modern epic fantasy, but rather post-apocalyptic fiction.  The Mongol-inspired orcs from The Lord of the Rings literally dehumanize barbarians.  Barbarians, of whatever sort, are usually explicitly evil or noble savages in traditional fantasy.  Howard knew better, and while Conan never sets foot back in Cimmeria, he travels through the lands of many barbarians, from kozaks to Afghulis.  Where so much fantasy uses whatever sort of barbarians as a foil, Howard saw civilization as inherently trending toward the decadence that would be its downfall.  Fear of the same is much of what drives the popularity of zombie fiction today and leads people to make silly analogies between dystopian fiction and politics.

The Hyborian Age may be doomed, but Conan is not.  Conan soldiers and thieves and drinks and kills through the Hyborian Age with joy and abandon.  His only sorrow is behind him, in Cimmeria.  Tis no surprise, then, that in Howard’s fictional history the remnants of the remnants of the Cimmerians would become the Gaels, “the men that God made mad, for all their wars are merry, and all their songs are sad” (Chesterton).

If you are interested in Conan, you owe it to yourself to pick up the Del Rey editions.  From the editor’s introduction: “[U]ntil the present publication, Howard’s Conan stories had never been published as Howard wrote them, in the order in which he wrote them, in a uniform collection…. [N]ot only were [Conan stories] presented following someone else’s reconstruction of the character’s ‘biography,’ but pastiches of arguable quality (to say the least) were interpolated among Howard’s tales. Further, some of Howard’s own stories were rewritten, other non-Conan Howard tales were artificially transformed into Conan ones, and Conan stories that Howard thought too little of to finish were completed by other writers.”

The Phoenix on the Sword, first published in Weird Tales, December 1932

The God in the Bowl, original version first published in The Tower of the Elephant, Donald M. Grant, 1975

The Tower of the Elephant, first published Weird Tales, March 1933

Queen of the Black Coast, first published Weird Tales, May 1934

Xuthal of the Dusk, first published Weird Tales, September 1933 (as The Slithering Shadow)

The Pool of the Black One, first published Weird Tales, October 1933

[1] Howard’s own reasoning is as good as any.  “In writing these yarns I’ve always felt less as creating them than as if I were simply chronicling his adventures as he told them to me.  That’s why they skip about so much, without following a regular order.  The average adventurer, telling tales of a wild life at random, seldom follows any ordered plan, but narrates episodes widely separated by space and years, as they occur to him.”

9 Responses to Summer of Conan: Howard’s True Successors are in Post-Apocalyptic Fiction, not Epic Fantasy