My relationship with Skin Game is naturally going to be a bit different than that of its average reader. I had not, up to this point, read any of the Dresden novels or any of Butcher’s work. I started not with the first book in the series but this one, the fifteenth. Not living under a rock, I have of course been aware of the series, and vaguely planned to start reading it, but I only started now, and with this book, because it was nominated for a Hugo Award. 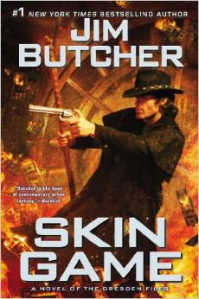 I won’t dwell on the story, but Dresden, a wizard operating out of Chicago, is loaned out by his current, unwanted boss of a fae queen to a nemesis controlling a fallen angel. Why? To rob Hades’ vault. So it’s ultimately a heist book where the protagonist knows his employer will try to stab him in the back and would just as soon return the favor.

It’s easy to see why Harry Dresden has become a towering figure in urban fantasy. The first-person narration from Dresden tripped me up a bit in the beginning, but pretty soon reading it becomes natural and it’s off to the races. The action comes early and often, without ever feeling like an RPG random encounter. Stakes are set high and only go up from there, without ever feeling cheap. There is more than one Big Twist, without ever being predictable or irreconcilable with the setup. The magic and monsters are inventive and bizarre in the best of ways. Dresden himself could be the trope codifier for the Deadpan Snarker but there is more to him than that, and he’s surrounding by diverse, fully realized allies and enemies (and allienemies). For all the heart-stopping and heart-pounding action, this is no empty popcorn, escapist, simple-minded yarn either. Butcher fits in plenty of serious, intelligent meditations on force and loyalty and faith.

Going to my own very narrow competitive advantage as a reviewer of this book—is it a good place to jump into the series? For obvious reasons it makes more sense to start with book 1. But Skin Game works as a standalone. There is obviously a whole lot of history lurking around the edges, but it makes the book richer rather than confusing. Butcher manages to give enough info to keep the new reader from getting lost without endlessly droning on about past events. The Dresden Files are, I gather, more a series of individual stories than build upon each other rather than a single, huge story, so you can pick up book 15 and enjoy it in a way that you could not for, say, book 14 of the Wheel of Time. But I think there is definitely a better payoff for the reader who has read the entirety.

Blogs on books at Every Day Should Be Tuesday (speculative fiction) and Hillbilly Highways (country noir and nonfiction). https://everydayshouldbetuesday.wordpress.com/ https://hillbillyhighways.wordpress.com/
View all posts by H.P. →
This entry was posted in Book Reviews, Fantasy and tagged 2015 Hugos, Roc, Urban Fantasy. Bookmark the permalink.

8 Responses to Review of Skin Game by Jim Butcher