I read Joe Steele—and wrote an Amazon review—back when it came out in spring 2015.  I wanted to revisit in light of the rise of Trump (and the addition of an Infomocracy tag) and to give further consideration to how plausible the alternative history is.

This post is the second in a mini-series in honor of the election.  I already posted a review of Heinlein’s Double Star and hope to post reviews of Orwell’s 1984 and Malka Older’s Infomocracy in the next week. 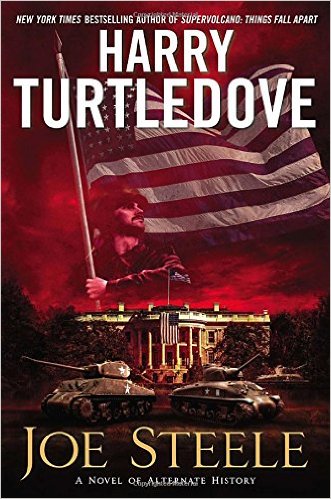 So how plausible is it?  First off, the Democratic nominee is set to win in a walk before hitting a snag.  Ok, not implausible.  Of course here it’s a suspicious fire, not an FBI investigation you could see coming from a mile away.  But elections, and especially nominations, are very imperfect proxies for the Will of the People and weird things can happen.  Like a non-conservative winning the GOP nomination with a little over a third of the vote.  And it was a Great Depression then, not a Great Recession, so no backstop from the opposition party.

So a bad hombre gets elected president.  Don’t we have institutions to stop that?  Co-equal branches of the government?  The Fourth Estate?  Turtledove cannily starts with parallels—labor camps instead of CCC camps, the GBI instead of the FBI.  But Steele is able to do something FDR couldn’t—bring the United States out of the Great Depression on the strength of his policies.  But FDR’s initial programs that relied heavily on central planning weren’t successful.  There is no reason to think a heavy hand from Steele would have done better.  The Paul Samuelson introductory economics textbook for years said that the USSR was growing faster than the US and would inevitably overtake us economically.  The former may have been true; the latter was blatantly false.  And if the former were true, it was only possible because the USSR was so poor to begin with.

More troubling, I think, is the reaction to Steele’s initial crackdown.  As they did with FDR, the Supreme Court holds part of his initial program unconstitutional.  But where FDR responded by attempting to pack the Court, Steele knows his Shakespeare—he goes right to killing lawyers.  The crazy thing is that where the Court packing scheme was a huge scandal, the reaction to executed half the Court is muted.  I’m a little more inclined than I was a year ago to expect cowardice from elected politicians, but, really, nothing in response?

So is it plausible, after all?  I’m more inclined to see weakness in our institutions and say ‘yes’ today, but Turtledove doesn’t show his work.  If the U.S. is really susceptible, have we just been lucky?  Was the Great Depression an almost uniquely dangerous time?  I would have loved to read a deeper exploration of that and how it could happen, but maybe it’s better that he gives leaves us plenty to think about.  And the reason that Joe Steele works is Charlie’s and Mike’s arcs.  It’s ultimately an intimate story set against the backdrop of world changing events.

Joe Steele is Master of Alternative History Harry Turtledove’s imagining of what would have happened had Joseph Stalin’s parents immigrated to America.  It devotes little (too little, I think) attention to his initial rise, starting with Stalin forces wrangling with those of FDR at the 1932 Democratic National Convention. Stalin, er, Steele takes the nomination after FDR dies in a suspicious mansion fire.  From there we see the results of a very long presidency.

Turtledove makes the wise decision to tell his story entirely through two journalist brothers, one who gravitates to Steele’s inner circle and the other a dissident.  The restricted perspective works.  As two committed Democrats (a plausibility stretch for two journalists, I know), Charlie and Mike aren’t inclined to question Steele’s policies at first.  We don’t (initially) see firsthand what happens in the work camps.  Much of Steele’s machinations and heavy-handed policies start outside of the eyes of our characters—we only see the results.

It’s a scary story, and it’s only made more frightening by how similarly Steele’s administration starts to FDR’s.  Steele too starts with a dramatic increase in central planning.  Steele too runs up against the Supreme Court.  He, however, takes a more direct route in response.  Stalin, er, Steele, knows his Shakespeare and starts by, if not killing all of the lawyers, killing four on the Supreme Court.

It’s a well written story.  There isn’t a lot of action, but Turtledove adroitly keeps the tension at a slow boil and the story pulls the reader along.  The alternative WWII is particularly interesting, and what happens after Steele dies is even more compelling than what happens during his life.  There’s a terror in what passes unsaid (such as what happens to the Supreme Court justices in custody).  The brothers’ arcs complement each other magnificently.  It has a killer final paragraph.  For criticism, I have the usual differences of opinion as to how things would have gone and not enough is given to how Steele rose to where he was at the beginning of the book (the impediments to a Russian immigrant rising to national power would be high then and now).

Disclosure: I received a free copy of Joe Steele through NetGalley.

Blogs on books at Every Day Should Be Tuesday (speculative fiction) and Hillbilly Highways (country noir and nonfiction). https://everydayshouldbetuesday.wordpress.com/ https://hillbillyhighways.wordpress.com/
View all posts by H.P. →
This entry was posted in Alternate History, Book Reviews and tagged Infomocracy, Roc. Bookmark the permalink.

3 Responses to Review of Joe Steele by Harry Turtledove