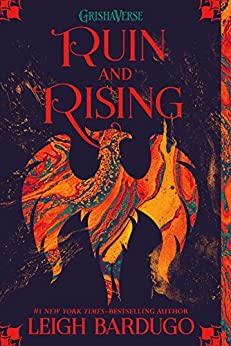 Ruin and Rising brings Leigh Bardugo’s Grisha Trilogy to a close.  I was in at the ground floor, reading the first and second books right around the time they came out.  I inexplicably waited until now to finish the trilogy.  Many, many other people did not.  Bardugo’s works, all set in the same world, have proven wildly successful and will soon appear as a Netflix show.

The unwashed masses, for once, have got it right.  The worst thing that I can say about Ruin and Rising is that it doesn’t quite clear the very high bar set by the first two books.

Ruin and Rising picks up where Siege and Storm left off.  After suffering calamity and defeat at the hands of the Darkling, Alina et al have been forced to flee underground with the Rasputin-like Apparat.  Alina is treated as a living saint, but she is also treated as a prisoner.

The story does not, of course, take place entirely underground.  Alina will eventually have her chance at the third Amplifier.  We will learn Nikolai’s fate.  The Darkling will reappear.  We learn much more of the history behind the Darkling and the Amplifiers.  There is many a twist twixt cup and lip.

I hesitate to say more, because I don’t want to spoil the finale.  Or, for that matter, the preceding books.  Suffice to say, Bardugo has given us one of the better series of the young century.  My quibbles are just that—quibbles.  The storytelling can be a bit abrupt, too reliant on shocking the reader with a fast twist rather than carefully laying the groundwork for one.  The cast is a little too big at times, although my personal take has a lot to do with waiting several years between books two and three.

On to the Six of Crows duology![1]

[1] Okay, it may take me a few years to actually get there. Mount TBR continues to loom, and that is just the books I physically own and live in mortal danger of toppling onto me.

Blogs on books at Every Day Should Be Tuesday (speculative fiction) and Hillbilly Highways (country noir and nonfiction). https://everydayshouldbetuesday.wordpress.com/ https://hillbillyhighways.wordpress.com/
View all posts by H.P. →
This entry was posted in Book Reviews, Fantasy and tagged Flintlock Fantasy, Silk Road Fantasy, Young Adult. Bookmark the permalink.