Rereading The Eye of the World, chapters 1-12

I can’t imagine approaching this series as a neophyte (even though this is technically my first reread!).  The Wheel of Time has been part of my life since 1992.  I read the first several books countless times.  The series was the sole tie I kept with fantasy during my college years.  Brandon Sanderson picking up the reins after Jordan’s untimely death reignited my interest in fantasy for good.

The entire series stretches close to four and a half million words.  It is a fair estimate to say that I have read over ten million words written by Jordan, counting all my rereads and the other Jordan books I have read.  The vast majority of that was with a single set of characters (admittedly a pretty big set).  I have a connection with these characters like no others.  Even with Tolkien, the story is much smaller, and the characters not as fleshed out in the end.

Starting up my reread this time, then, much like starting up my reread in anticipation of A Memory of Light, is an emotional experience.  A single line can instantly recall an 8-book story arc.  Romance rarely works for me outside of The Wheel of Time, but a series of this scale has a singular advantage on that front.  We experience events, everything really, differently at different stages in my life.  The Wheel of Time is a work that I have approached as a kid, as a teenager, as a college student, as a 20-something getting started in the world, as a 30-something family man.

So that is why I keep having to hide the welling of tears at seemingly innocuous lines from my wife. 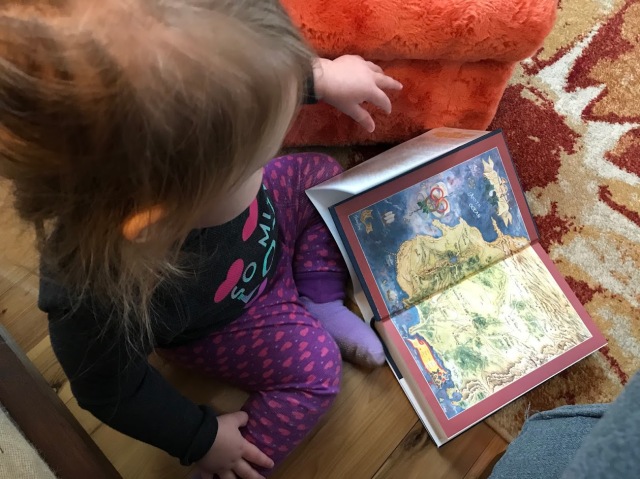 I will avoid minor observations (did you ever notice Moiraine refers to Thom as “master bard” the first time she talks to him in Emond’s Field?) and make two big comments on this chunk of the book (getting them across the River Taren).

I have seen complaints that The Eye of the World gets off to a slow start.  I don’t get it.  (Especially compared to The Fellowship of the Ring.  That one I get after rereading the series the summer before last.)  Sure, the attack on the farm doesn’t come until several chapters in.  But it is fabulous.  Jordan is always an easy read.  The introduction to the Myrddraal is so damn creepy.

My real point, though, is how effective that introduction is.  The “dailyness” of it.  To be firmly panted down in this richly realized world, amongst richly realized characters, provincial and naïve but human in all the best ways.  Characters who get a glimpse at excitement beyond dream and then quickly wake up in a nightmare.

There is an immense amount of detail.  Not to show off Jordan’s erudition (which was immense).  Not to pad out the word count (which, uh, also wound up being immense).  But to invest us in the story in a way that a cheap set piece cannot.

I started reading The Bard’s Blade by Brian D. Anderson at around the same time (surprise book mail is the best mail!), and I am enjoying it, but the contrast in craft is stark.  Next to The Wheel of Time, other fantasies feel faintly sketched and half unfinished.

Okay, one final comment.  One reason I have always pushed back on the argument that The Eye of the World starts slow is that it sticks with one storyline.  Only three POVs are used and the party is only split one, and then not for (too) long.  Jordan would vastly increase the scale in later books but he eases us in in a way that many fantasy novels series today telling much smaller stories do not.

Okay, seriously, this is my last comment.  The foreshadowing is massive.  I am firmly of the mind that The Eye of the World isn’t given enough attention by the fandom.  Jordan knew his business (or, perhaps even more impressively, figured out how to incorporate miscellaneous stuff later).  But it is fun to spot things he subsequently dropped: the talking Trolloc, Trolloc tribes, Lan’s armor.

You can find all of my reread posts at The Wheel of Time Reread Index.

Blogs on books at Every Day Should Be Tuesday (speculative fiction) and Hillbilly Highways (country noir and nonfiction). https://everydayshouldbetuesday.wordpress.com/ https://hillbillyhighways.wordpress.com/
View all posts by H.P. →
This entry was posted in Fantasy, Sundry and tagged Epic Fantasy, Reread, Wheel of Time. Bookmark the permalink.

9 Responses to Rereading The Eye of the World, chapters 1-12