Revisiting George R.R. Martin’s A Song of Ice and Fire: A Clash of Kings

With HBO’s adaptation of Martin’s epic fantasy series almost finished, even if the series itself certainly isn’t, I will be revisiting my original reviews from 2011 of the five books in the series completed by Martin.  You can find my review of A Game of Thrones here and my reviews of A Storm of Swords, A Feast for Crows, and A Dance with Dragons here,  here, and here respectively.

A Clash of Kings is the follow-up to A Game of Thrones and the second of a projected seven books in the Song of Ice and Fire series (upon which HBO’s Game of Thrones is based).  Following the events of the first book, as many as five different kings are vying for the iron throne.  Needless to say, the political situation dramatically changes again over the course of the book, and the series adds to the already impressive body count from A Game of Thrones. 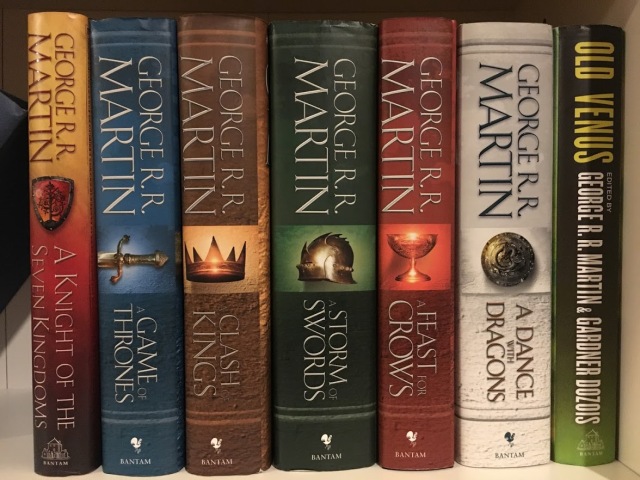 Martin remains a master of suspense, and your ability to put the book down will dissolve little over half-way through.  In a change from the first book of the series, Martin begins to let major events happen off-screen (albeit at least once for plot purposes).  Martin also gives much more background about the world that he has created in this book (thankfully in an adept way that avoids the dreaded info dump).  Magic plays a larger role in A Clash of Kings than in A Game of Thrones, which may be expected, as it is hinted that the erosion of magic in Martin’s world was linked to the apparent extinction of the dragons.

A Clash of Kings sags a bit in comparison with its predecessor and successor, but it is still an extremely good book and should not be overlooked.

Rebecca on A Clash of Kings at Reviews Feed.

Blogs on books at Every Day Should Be Tuesday (speculative fiction) and Hillbilly Highways (country noir and nonfiction). https://everydayshouldbetuesday.wordpress.com/ https://hillbillyhighways.wordpress.com/
View all posts by H.P. →
This entry was posted in Book Reviews, Fantasy and tagged Epic Fantasy, Game of Thrones, Grimdark. Bookmark the permalink.

4 Responses to Revisiting George R.R. Martin’s A Song of Ice and Fire: A Clash of Kings