Episode 2, A Knight of the Seven Kingdoms, is another slow episode, but it is vastly better than episode 1.  The first half of the episode drags as expected guests arrive at Winterfell and long-separated characters have conversations about things we already know.  But it is a very good episode nonetheless.  One, because the impending attack by the Night King—before the next sunrise after Tormund arrives, as we know from the previews—gives everything that happens in the second half of the episode an extra edge.  Two, because the writing is killer.  There are so, so many great one liners.

The previously-on suggests that this episode will be dominated by the tension between Dany and Jon now that Jon knows the truth of his parentage.  The one clip that isn’t recent is Jaime pushing Bran out of the window at the end of the first episode.  Well, yeah, now I can see why we won’t quite yet get to the Battle for Winterfell this episode, although those two aspects play a surprisingly small role.

Full SPOILERS below the cut. 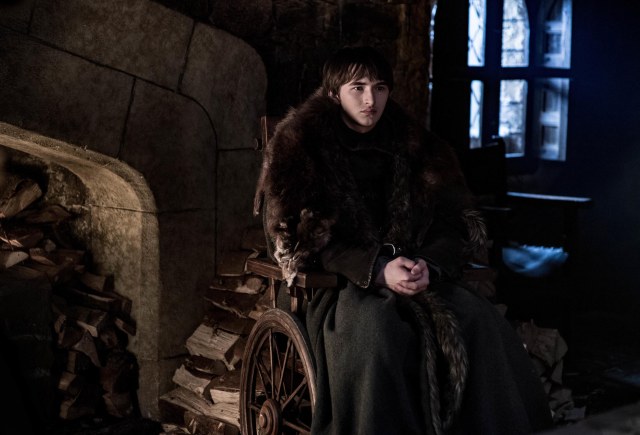 The episode opens with the scene from the preview: Dany dressing down Jaime.  I am expecting Bran to save him.  He cryptically says, “The things we do for love” (the same thing Jaime said before pushing him out of that window) but leaves it at that.  Instead Brienne stands up for him.  We expect Jaime’s anti-rape-of-non-siblings stance to go a long way with Dany, but it is Sansa who responds.  She defers to Brienne because she trusts her, showing wisdom (there, I said something nice about Sansa).  Jon, demoted to Warden of the North and in keeping with his open borders policy, is always down for one more.

Arya approaches Gendry in the forges about that order she put in last episode.  Nobles make terrible clientele for blacksmiths.  (By the way, the obsidian weapons Gendry is crafting are oddly durable for being made out of rock.)

Jaime approaches Bran in the Winterfell godswood. “Why didn’t you tell them?” “You won’t be able to help us in this fight if I let them murder you first.” “What about afterwards?” “How do you know there is an afterwards?”  Bran has his priorities straight: (1) weirding people out by being cryptic and inscrutable; (2) the existential battle with the dead.

Jaime and Brienne talk tactics.  It looks like the battle will primarily take place outside the walls, which, unfortunately, makes sense.  They have too many men now to squeeze into Winterfell, and Dothraki aren’t much for castle defense.  They have been hard at work, though, preparing perimeter defenses.  Jaime will join Brienne on the left, which she is commanding.  A later strategy session—after a great speech by Jon that I’m not a quick enough typist to transcribe—discusses the bigger picture.  Jon endorses Beric’s plan to kill the Night King.  Jaime says the Night King will never expose himself, but Bran says the Night King will come after him.  As he has come after many Three-Eyed Ravens, because they are man’s memories.  “I’ll wait for him in the godswood.”  With, uh, Theon Greyjoy for protection?  Theon does not have any Valyrian steel. 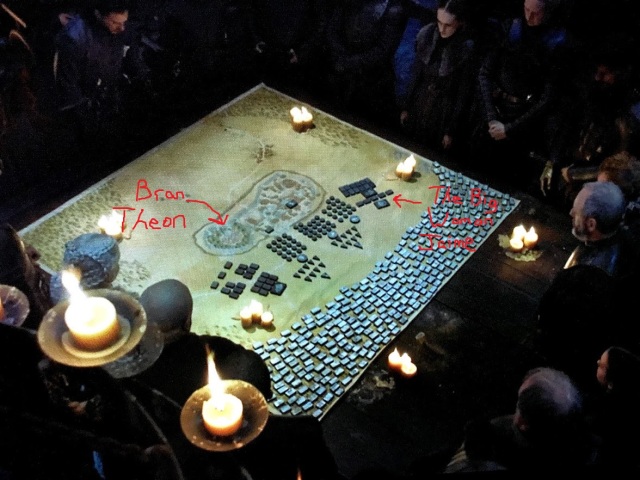 Jorah sends Dany to talk to Sansa.  Sansa, the pot, tells Dany that, “Men do stupid things for women.  They’re easily manipulated.”  Dany, rightly, points out how little Jon gave up to get her to come the North to fight for him and his people.  “Tell me, who manipulated whom?”

Sansa is savvy enough politically to still push for autonomy after the war.  Dany?  Dany is . . . not as savvy as Sansa.  A harsh criticism, but fair.  Nexit is off the table for now, despite the fact , and let’s be brutally frank here, that there isn’t going to be much of the North left after, other than the scenery.

Dany has a point about the manipulation.  Although I would hope Dany would have a better reason for coming north than love.  Must family—as a proxy for selfishness—be the only motivation for acting for the common good?

Theon is the second person to walk into a Winterfell where all the Northerners wants him dead.  Sansa hugs him.  It is sweet, to be honest.  Theon has done precious little good in this series.  Sansa has had so little good done for her.  There, a scene with Theon I wouldn’t cut.

Dolorous Edd, Tormund, and Beric arrive next.  “We had to travel around them to get here.  Whoever’s not here now is with them.”  “How long do we have?”  “Before the sun comes up tomorrow.”  Aaaannnnd “the big woman still here?” Because Tormund has his head on straight. 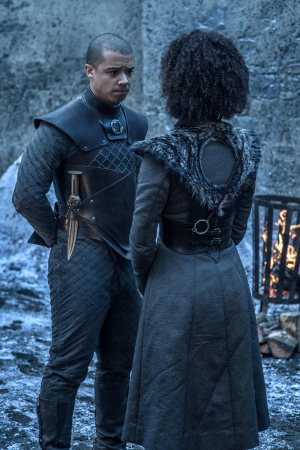 Grey Worm sees no place for himself in a post-conquest Westeros and wants Missandei to leave with him.  Assuming, you know, that there is an after.

Much of the remaining cast of characters migrate to the same hearth, and Tormund tells us how his he earned the moniker Giantsbane.  It is everything you ever wished for.  He also tells Brienne he would knight her ten times over if he were a king.  A power move in the competition for Brienne, but Jaime one-ups Tormund’s proto-feminism by insisting to Brienne that she be knighted and that he can do the deed (Jaime insists his knighthood is enough rather than claiming any right to the Lannister seat in Casterly Rock).  It is genuinely effecting, mostly because of Gwendoline Christie’s acting through facial expressions but also because of the work done to establish the relationship between Brienne and Jaime.  It also provides a payoff to an ongoing examination of what it means in Westeros to be a “true knight” (if you don’t think it’s an important moment, note that it gives us the episode title).

Of course this is all undercut by a failure to knight the One True Knight—Ser Podrick Payne (the knight of our hearts).

Arya wants to know the Hound’s motivation, but he isn’t very forthcoming.  Maybe he is just looking forward to a few fucking chickens after the fight?

She goes looking for Gendry next.  He’s more forthcoming.  He’s got that new weapon we were teased with last episode.  It looks like a double-bladed spear.  Arya, like a true soldier, only wants one thing before a fight more than a new weapon.

The show has lain the groundwork for Arya and Gendry with their flirty conversations earlier in the series (and with all the talk of the crypts and that scene there with Jon and Dany, it is a callback to Robert telling Ned in the crypts that there houses should be joined).  It was the execution that was lacking.  It was too much I’m-a-woman-now-so-I-must-immediately-have-sex-but-without-joy and not nearly enough we’ve-got-this-sexual-tension-and-will-probably-die-tomorrow-so-tonight-let’s-live.

Arya tells Gendry to take his pants off.  She may be a maid, but she knows more about sex than most of the characters in the Game of Thrones.  Given past sex scenes, this is perhaps Pod’s trick.  Taking his pants off.

We get the conversation/confrontation between Jorah and Lyanna Mormont that we were robbed of last episode.  Next, Sam approaches Jorah.  “Your father taught me how to be a man.  How to do what’s right.  This is what’s right.”  Sam gives Jorah his sword for the fight, as suspected by many (based on preview footage).

Down in the crypts in front of Lyanna’s statue, Dany asks “who’s that?,” confused because there are two characters named Lyanna, probably.  Jon manages to avoid responding, “my mother.”  But, when Dany expresses her confusion that Rhaegar raped Lyanna, Jon can’t keep the truth in any longer.  His loyalty to his supposed father’s honor has transferred to his real father, and to his mother.  He tells her everything.

“This goes beyond loyalty.  This is about survival.” – Jaime

One of the best, albeit understated, themes of the series has been Jaime’s quest to redeem his honor, in his own eyes only, by keeping what promises he hasn’t already broken.

Although, as with Dany, Jaime has personal reasons as well.  He finally admitted to himself who his sister is, but he has two friends who are now in the North.

Jaime’s scenes with both Dany and Brienne are interesting in light of my stated quasi-prediction for his place in a post-series Westeros.  Tormund will make a good rebound for Brienne.

“I was sleeping with my sister.”  Is this the first time Jaime has actually admitted it verbally? 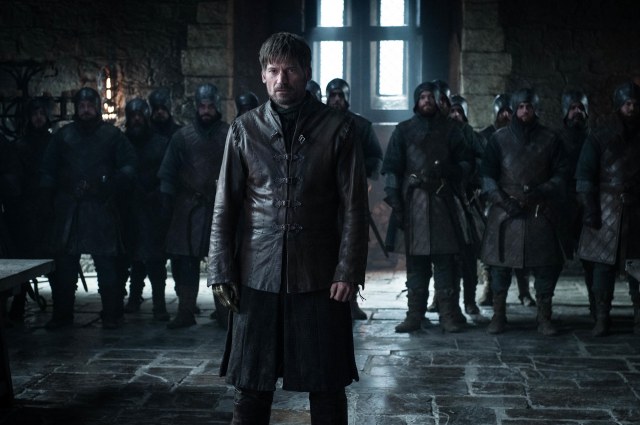 Still with the fan service/callbacks.  Come on y’all.  We have six episodes.  Let’s keep it moving.

Bran points out that no one has actually tried to use dragon fire against a White Walker.  We know it works as well as any other fire against the wights.  We haven’t actually seen a White Walker die to fire, have we?  Only Valyrian steel and dragonglass.  They were able to walk through the Children of the Forest’s fire when they came for the Blood Raven.  Regardless, this is another sign that Bran isn’t omniscient, as some have inferred.

They do not seem to be planning for the Night King’s dragon, even though Bran warned them about it in the first episode (and Tormund and Beric can back him up on that).  One thought: the Night King might be reticent to make heavy use of his dragon against humans in combat because dragon fire doesn’t leave enough of a dead human to turn.

The suggestion is that Arya is least afraid of the dead because of her time with the Faceless Men, who worship the Many-Faced God, a god of death.  But that should make her most afraid.  What greater threat to death can there be than the undead?

The episode contains lots of references to the crypts, their relative safety, and how many named characters and redshirts will be there.  Ominous.  Sam will be down there, but without a Valyrian sword.  Hopefully he at least brings his trusty dragonglass knife.

“And now our watch begins.”  “I stole a considerable number of books from the Citadel library.”  “Samwell Tarly, slayer of White Walkers, lover of ladies.  As if we need any more signs the world was ending.”  There are so, so many great lines in this episode.

We know the battle won’t be until next week, but that knowledge amps up the suspense.  Every scene in the latter part of the episode leaves us wondering whether it will end in three calls of the horn.

Still no Howland Reed.  Dany isn’t inclined to credit the Three-Eyed Raven.  Reed is the only living person who has first-hand knowledge of the truth.

Zero scenes take place out of sight of Winterfell.

That final fucking scene.  Just the music alone was enough to have my guts twisting.  From the very first scene of the series we’ve been promised a life-or-undeath confrontation with ice zombies and now we’re going to get it.

I will be traveling next week, but I should be able to still watch Game of Thrones and get my recap and reaction up.  Tomorrow I will revisit A Clash of Kings.