Review of The Walking Dead Vol. 31 by Robert Kirkman 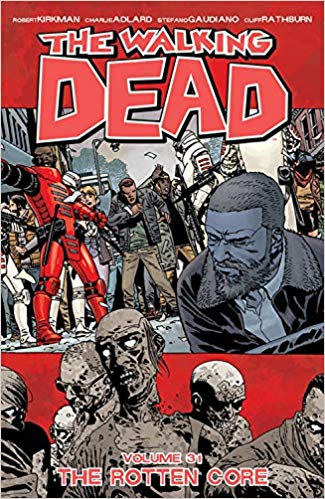 A long-term comics story requires a certain ebb and flow.  Not every volume of The Walking Dead can have massive set pieces.  Nor would we want it to.  And the comics do a much better job than the show at proper pacing.  But, still, the setup volumes are always a bit of a letdown, and volume 31 is definitely a setup volume.

The entire volume is devoted to Rick giving a tour of our heroes’ communities and touring the Commonwealth in turn.  Where he, of course, learns about its rotten core.  When that rotten core splits—say . . . in the next volume—there is going to be hell to pay.

The Walking Dead is better if you forget it thinks of itself as a biting critique of capitalism (check the copy on the back cover).  The world of The Walking Dead makes capitalism look awesome.  The Commonwealth is, I think, very much intended as a more direct critique of contemporary American society than is usual.  There are a lot of issues with that.  The Commonwealth makes more sense as simply a storytelling tool than as a critique or as any sort of realistic post-apocalyptic society.

And, really, the structure of the Commonwealth doesn’t make any sense.  Leveraging pre-apocalypse status has a certain logic to it in that is a thing readily ascertainable and thus can pretty easily be put into place.  But the world has drastically changed.  Blacksmiths are worth far more to society now, lawyers far less.  And while there might be some value to a more strictly regimented society, doing it on obsolete status lines makes that structure even less viable.  How did the Commonwealth ever get to where it is today?

Best, as I said, to ignore that.  It really is a well written volume that stands just fine on its own.

My other big frustration with Michonne.  It makes sense that she would agree to represent a bad man because she was a U.S. lawyer and believes that everyone has a right to representation.  And it makes sense that her judgment will be clouded by her desire to stay with her daughter.  But it doesn’t make sense the way she seems to be heavily influenced by the status she was handed, especially considering she was already an important woman back in Alexandria et al.

Blogs on books at Every Day Should Be Tuesday (speculative fiction) and Hillbilly Highways (country noir and nonfiction). https://everydayshouldbetuesday.wordpress.com/ https://hillbillyhighways.wordpress.com/
View all posts by H.P. →
This entry was posted in Book Reviews, Dystopian/Apocalyptic, Horror and tagged Graphic Novels, Image Comics, Post-Apocalyptic, The Walking Dead, Zombie Fiction. Bookmark the permalink.

1 Response to Review of The Walking Dead Vol. 31 by Robert Kirkman