First things first, this review is going to be full of spoilers for Sins of Empire, the first book in McClellan’s Gods of Blood and Powder series.  If you haven’t read that book, go back and read that review instead of this one (or just go ahead and buy it).  And if you haven’t already read McClellan’s Powder Mage trilogy, you really need to start with Promise of Blood.

Bottom line: Wrath of Empire is probably McClellan’s weakest book due to some storytelling shortcuts, but McClellan’s worst is better than most writers’ best, and he is still the dean of flintlock fantasy for a reason (even if I did read By Fire Above first). 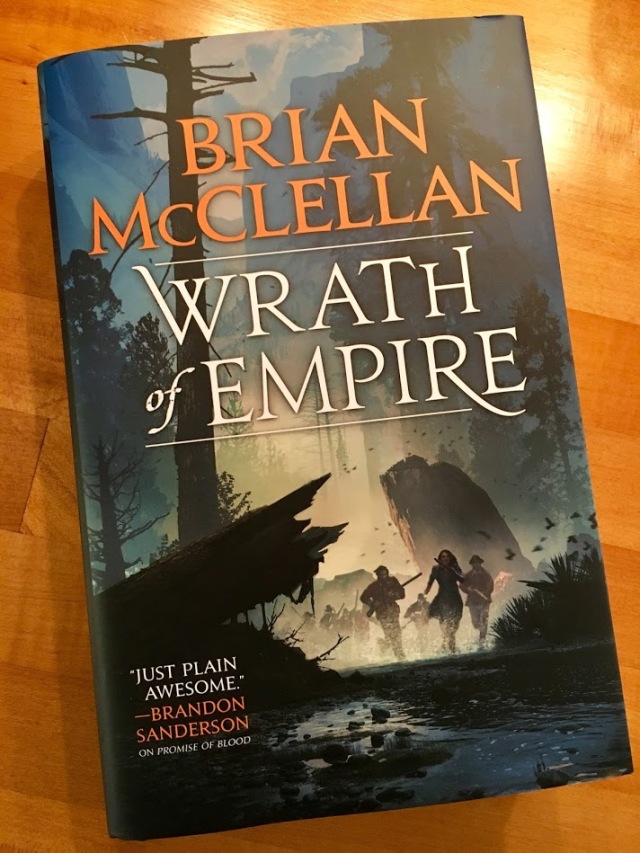 Wrath of Empire splits quite evenly between three POVs, usually rotating with each chapter.  Vlora Flint is leading her Riflejack mercenary company away from Landfall after its sack by the Dynize.  Mad Ben Styke, now leading the reconstituted Mad Lancers as part of the Riflejack cavalry, is with her but they soon split up.  Vlora, along with Taniel and the Riflejack infantry, rushes to a frontier mining town in search of one of the godstones.  Styke, accompanied by Ka-Poel, heads west with the Riflejack cavalry in search of the final godstone.  Blackhat double agent Michel, still in occupied Landfall, is tasked by Taniel with finding and extracting a Dynize conspirator.

McClellan’s strengths—along with the perfect magic system for a flintlock fantasy—have always been clean prose, technical storytelling proficiency, and absolute knockdown battle scenes.  He doesn’t skimp on that last one: we get two battles in the first 43 pages.  On the other hand, McClellan resorts to some lazy storytelling conventions in Vlora and Styke’s plotlines, something I haven’t caught him doing since his first book.  In part because of this, and to my surprise, Michels’ plotline wound up being my favorite.

Sins of Empire ended with a Dynize invasion of Fatrastra.  I really dug the opportunity to learn more about the Dynize in this book, mostly during Michel’s POV (another reason why that character’s story leapt up in my estimation).  I mentioned the New World vibe in my review of Sins of Empire.  But with the Dynize, McClellan is pulling in some East Asian elements.  But it isn’t simple fusionism.  McClellan draws enough parallel to our world to leverage our schema for those elements, but he also makes it feel new and fresh.  In general the setting has been much more interesting in this series than in the original trilogy.

The climax, as usual, is explosive.  The man can write a damn action set piece.

Orbit sent me a review copy of Wrath of Empire.

Blogs on books at Every Day Should Be Tuesday (speculative fiction) and Hillbilly Highways (country noir and nonfiction). https://everydayshouldbetuesday.wordpress.com/ https://hillbillyhighways.wordpress.com/
View all posts by H.P. →
This entry was posted in Book Reviews, Fantasy and tagged Epic Fantasy, Flintlock Fantasy, Orbit. Bookmark the permalink.