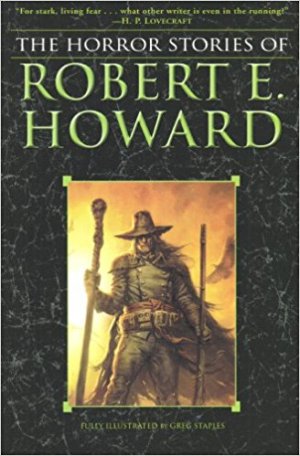 The mighty poets write in blood and tears

And agony that, flame-like, bites and sears.

They reach their mad blind hands into the night,

Tuesday was World Mental Health Day.  When Damon Knight and L. Sprague de Camp were denigrating Robert E. Howard, they were doing it used terrible pseudo-psychology.  Their criticism of Howard belongs in the dustbin of history with that pseudo-psychology.  What happened to Howard was a tragedy.  A transcendentally talented young man, who may have been mentally ill, made a terrible mistake during a crushing time.  And people go through every day what Howard went through.  He wasn’t a weirdo, except in that it was weird how damned good a writer he was.

I didn’t quite get through a full third of The Horror Stories of Robert E. Howard, but the middle has some of the meatiest stories, including my favorite so far.  I already posted on the first part of his collected horror stories, and I will post on the rest of the stories in two weeks.  The stories and poems covered in this post are listed at the bottom.

In case you’re wondering who Howard’s horror influences are, he gives us a pretty good clue when a character identifies Lovecraft’s Call of Cthulhu, Poe’s The Fall of the House of Usher, and Machen’s Black Seal as master horror tales.  (And in Howard’s world, erudite men don’t blush at serious discussion of horror in the salon.)  But you don’t need that to see Lovecraft’s influence, at least.  It is plain, especially in these stories.  Even though, per Jim Fear, they should probably only be labeled quasi-Lovecraftian.

A character called Conan of the reavers appears in the (excellent) People of the Dark.  Howard would use that name again.  Delenda Est and The Cairn of the Headland are historical, supernatural horror, and each has a nice twist to it that really leverages the history.  There are two stories in particular from this chunk of the book that are worth discussing: Worms of the Earth and The Valley of the Lost.

Worms of the Earth is my first Bran Mak Morn tale.  Before picking this collection up for a little HallowRead, my intuition was to go from Conan to Bran Mak Morn.  It was a good intuition, though.  Bran Mak Morn is a Pict king during the twilight of his people, fighting the encroachment of the Roman Empire.  I always loved Howard’s depiction of the Picts in his Conan stories.  Bran Mak Morn is no Conan, though.  He is more normal in stature, and distinctly wolfish.  Where Conan might have lashed out immediately when a Roman governor crucified his countryman (if he even cared that it was one of his countrymen),* Bran Mak Morn coldly plots revenge.  And to get it, he goes straight to dabbling in the black arts, negotiating with a degenerate, fae race dwelling underground to strike at his foes.

“Bran, there are weapons too foul to use, even against Rome!”

Bran barked short and sharp as a jackal.

“Ha!  There are no weapons I would not use against Rome!  My back is at the wall.  By the blood of the fiends, has Rome fought me fair?  Bah!  I am a barbarian king with a wolfskin mantle and an iron crown, fighting with my handful of bows and broken pikes against the queen of the world.  What have I?  The heather hills, the wattle huts, the spears of my shock-headed tribesmen!  And I fight Rome – with her armored legions, her broad fertile plains and rich seas – her mountains and her rivers and her gleaming cities – her wealth, her steel, her gold, her mastery and her wrath.  By steel and fire I will fight her – and by subtlety and treachery – by the thorn in the foot, the adder in the path, the venom in the cup, the dagger in the dark; aye,” his voice sank somberly, “and by the worms of the earth.”

*Bran Mak Morn rejects Roman justice for one of his countrymen out of hand.  It is another particularly American touch from Howard, smacking of Americans’ insistence during the run-up to the American Revolution that they couldn’t possibly get a fair trial in England and similar arguments used during the Civil Rights Movement.

I’ve seen Howard crowned the king and inventor of the Weird Western, and after reading The Valley of the Lost, I know why.  The Valley of the Lost is just about a perfect story in every way (although the prose is a little pedestrian for Howard).  The structure, the tension, the payoff, the twists, the worldbuilding.  Howard does a phenomenal twist on the zombie.  Again, if you’re looking for new ideas about old monsters, Howard riffed on all the big ones.  And none of them sparkle.  Howard again features a degenerate race grown stunted in their pursuit of wickedness, their glory and millennia of evil behind them.  All against the backdrop of the red Texas sun, leather-skinned cowboys, and bloody red Texas feuds.  It is a very personal story, both in how it ends, the setting, and lines like this:

John Reynolds was a man of the outlands and the waste places.  He had never seen the great cities of the world.  But he knew that nowhere in the world today such a city reared up to the sky.

Robert E. Howard never got very far from Crossplains, Texas, but imagined things that nowhere in the world had anyone quite imagined just the same.

The Song of a Mad Minstrel (poem)

The Children of the Night

The Thing on the Roof

The Dweller in Dark Valley (poem)

The Horror from the Mound

A Dull Sound as of Knocking (poem)

People of the Dark

The Cairn of the Headland

Worms of the Earth

The Valley of the Lost

Blogs on books at Every Day Should Be Tuesday (speculative fiction) and Hillbilly Highways (country noir and nonfiction). https://everydayshouldbetuesday.wordpress.com/ https://hillbillyhighways.wordpress.com/
View all posts by H.P. →
This entry was posted in Book Reviews, Horror, Throwback SF and tagged Robert E. Howard, Vintage SF. Bookmark the permalink.