Blackwing is a Grimdark with Hope (but mostly Blood)

I’m not much for Grimdark.  It’s not that I’m against it, per se, but just that I haven’t limited experience with it.  I have my thoughts, but they aren’t exactly fully formed.  I say that to explain the long digression on Grimdark at the end.  You may not be interested, but Blackwing isn’t just a tremendous Grimdark book, it is a tremendous fantasy book, period.  So on to some exposition and a bit of fun!

It means serving Crowfoot, one of the Nameless, the demigods without whom the Range would have long since fallen to the Deep Kings, the really nasty demigods.  You really don’t want to get caught in between two sets of feuding, massively powerful immortals.  The Deep Kings send Darlings, powerful sorcerers who look like children, and drudge, men and women who have given up their humanity to become slaves and cannon fodder for the Deep Kings.

The Nameless counter in ways that make the Deep Kings look soft.  Grimdark.  Crowfoot created the Misery, a blasted land that now separates the Deep Kings’ empire from the Range.  Remember the Blight from The Wheel of Time?  The Misery is its own thing, but this is a trope I would like to see more of.  The Misery is deliciously twisted, full of weird, deadly flora and fauna.  The landscape constantly shifts, so the only option for finding your way is to navigate by the three moons.  It is also beautifully described: “The gash cut through the landscape of shifting dunes, caustic sand and brittle stones.  The lightning-bolt corridor mirrored one of the rents in the sky, the split in the earth a reflection of the damage in the heavens.”

The story kicks off in earnest when Crowfoot (via magical crow tattoo) orders Galharrow to protect the Lady Tanza from a drudge attack.  Tanza is a Spinner.  Spinners draw their power, called phos (good word) from the three moons, ideally using a loom and storing power in battery canisters.  This is a nifty magic system for a book that is also Flintlock Fantasy.  Phos can be used to power a proto-Industrial Revolution, and using three moons as a power source means scholarship by its users has a real effect on the magic system. 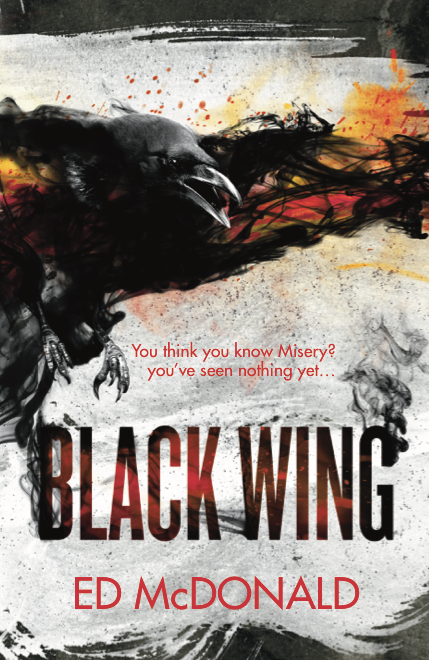 So Galharrow is tasked with saving Tanza.  Two problems.  The first is that Tanza is a connection to a past that Galharrow would just as soon forget.  (McDonald draws the reveal out to great effect, so I won’t spoil it here with any details).  The other problem is that any attack on the Range should be met with an immediate and deadly effect by Nall’s Engine (Nall being another Nameless).  When that doesn’t happen, well, you’ve got the grist for a pretty good story.

That’s a lot of exposition and especially worldbuilding, but McDonald has built a fascinating world here.  And I make no bones about my love of worldbuilding.  I am a fantasy fanatic after all.  Oh, I mentioned that Blackwing is Flintlock Fantasy.  It isn’t just the phos powering an early modern age.  Galharrow is as comfortable with a matchlock rifle and a flintlock pistol as he is with a cutlass or longsword.  The Range isn’t just protected by Nall’s Engine, it’s protected by cannon.

Blackwing is prominently marketed as the first book in a series—and I look forward to the sequels!—but it works very well as a standalone.

Blackwing has a lot going for it.  The worldbuilding is tremendous, the action scenes bloody, the human interaction surprisingly poignant.  The plot is well crafted.  One of my favorite aspects is the depiction of the Nameless and Deep Kings.  They are almost entirely offstage, but always near to mind.  McDonald really dives into what it means to get caught in a struggle between immortals.  It is the definition of a long game, and not one where you worry too much about the odd pawn.

But the best thing about Blackwing is the voice.  Blackwing is told entirely from Galharrow’s POV, so it is his voice.  It’s earthy and provides a lot of the “Grimdarkness” to the book.

Galharrow says things like:  “Speed, training and a policy of relentless savagery are what makes a man dangerous.”  And Galharrow is a dangerous man.

But not one without honor.  “‘I’m not one to stab a person in the back while they’re sleeping.  If I think you’re fighting the wrong cause, you’ll see me coming head-on.’  Actually, I’d stabbed more than one man in the back, but it sounded good.”  Ok, so he’s more on the pragmatic side.

“I shrugged.  I felt no sympathy for the drudge.  Had I the power, I’d unleash a hundred Engines against their empire and light a cigar from the embers.”  Beats killing them by hand.

He kind of has a point.  Saying things like this—“[M]y reserves of empathy were usually exhausted on orphans and puppies, a lot higher up the list that arsonists and arseholes”—doesn’t make you an asshole so much as a man with sound priorities.

Chivalry is fine, I guess.  But there is nothing wrong with being more Humphrey Bogart than John Wayne.  And this is war.  Better to be tough and brave.  “It’s less dangerous down in the gutters, away from anything that the drudge and their sorcerers might fling at the walls, but you can’t see shit and there’s nobody to kill.”

It’s a grimy story, to be sure, and Galharrow isn’t a knight in shining armor.  But heroism is not defined by the cruelty of the world but by the hero’s response to it.  Tolkien and C.S. Lewis could tell you a thing or two about a cruel world.  Galharrow has lived through a river of shit.  But he has never lost hope.

The world is a cruel mother, a matron of darkness, selfishness, greed, and misery.  For most, their time suckling at her breast is naught but a scramble through stinging, tearing briars before a naked, shameful collapse as the flesh gives out.  And yet in the bright eyes of every newborn, their lies a spark, a potential for goodness, the possibility of a life worth living.  That spark deserves its chance.  And though most of them will turn out to be as worthless as the parents who sired them, while the cruelty of the earth will them to release their innocence and join in the drawing of daggers, every now and then one manages to clutch to its beauty and refuses to release it into the dark.

And that makes all the difference.

Disclosure: The publisher provided me with a review copy of Blackwing via NetGalley.