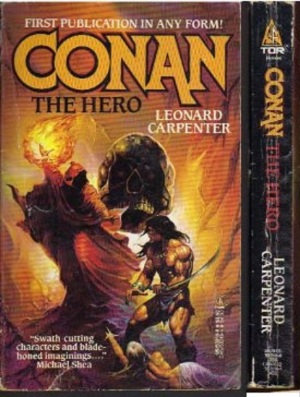 Today we close the books on The Summer of Conan.  You can find all of my Conan posts here.  Over the course of three months, I read every Conan story Robert E. Howard wrote, watched all three Conan movies, and read twelve Conan pastiches.  I did not, unfortunately, get to any of the Conan comics.  Reading Robert E. Howard’s original work was a revelation.  I would much rather go back and read Howard’s other work than dive back into the Conan pastiches, though I eventually will.  To that end, and with the Halloween season approaching with the end of summer, I am next turning to The Horror Stories of Robert E. Howard.

Leonard Carpenter wrote the most Conan pastiches of any of the Tor authors.  I’ve only read one of his eleven Conan novels.  Carpenter didn’t write many other novels, but he did write poetry, and what looks like a lot of short fiction.

Carpenter introduces Conan in Conan the Hero rising from slimy water into a steaming jungle, skin striped with “muddy tones of lampblack and umber.”  If that sounds kind of badass and kind of like Rambo, well, yeah.  Conan the Hero is a good book, but it suffers from being as influenced by the 1980s American drug epidemic, the Soviet-Afghan War, and, most of all, Vietnam as by Robert E. Howard’s Conan stories.

Conan starts the book fighting in the Turan army far, far to the east.  They are fighting against tribesmen in what is an obvious Southeast Asia analogue.  The desert natives struggle to operate in humid jungles that elephants are better suited to than horses (Carpenter does some cool worldbuilding with the elephants by the way).  Soldiers spend their leave in a city of the locals on their side that is run by a cruel drug lord.  Meanwhile, political machinations are afoot back in Aghrapur, but as usual the story isn’t nearly as interesting when Conan is offscreen.  In this book, it is not so much a barbarian-civilization clash as the inevitable failure of overstretched imperialism.

“On every side, ladies, are barbarous hordes who eagerly await a first sign of our weakness, the smallest chink in our imperial armor. All the great empires of history, once they have forgotten menace, have been overrun—their cities broken, their temples profaned, their thrones and alters besquatted by vile, hairy hides!  If we do not keep up unrelenting pressure against this external threat, why, even the sacred virtue of Turanian womanhood will be imperiled—”

I like this book, but it really suffers from the amount of contemporary influence that Carpenter allows to seep into it.  It isn’t quite so relevant today, and it detracts from the story as a Conan story.  But while I definitely put Carpenter a tier down from Robert Jordan and John Maddox Roberts, his work is better than that of Steve Perry or Roland Green, and I will eventually get around to reading the other Carpenter Conan book I own.

Blogs on books at Every Day Should Be Tuesday (speculative fiction) and Hillbilly Highways (country noir and nonfiction). https://everydayshouldbetuesday.wordpress.com/ https://hillbillyhighways.wordpress.com/
View all posts by H.P. →
This entry was posted in Book Reviews, Fantasy, Throwback SF and tagged Conan, Retro SF, Sword and Sorcery. Bookmark the permalink.

7 Responses to Summer of Conan: Leonard Carpenter’s Conan the Hero