I didn’t get to watch this episode live and had to wait until Wednesday to watch it.  But I guess it was worth a few days delay to see a full solar eclipse.  Now let’s go beyond the Wall!

A total eclipse of the spoilers. 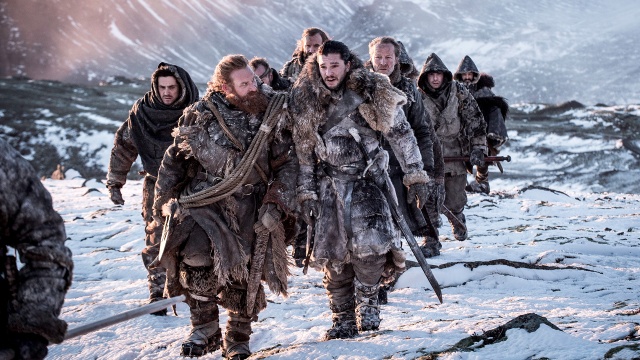 Nice reminder in the previously on that Jon’s sword had been Jorah’s.

The opening shot north of the Wall is spectacular.  Tormund points out that Mance’s pride about bending the knee cost many, many Wildlings their lives.  There is a lot of footage of everyone walking.  But I don’t have a single complaint.  Again, the backdrops are spectacular, and the conversations—several of them—are wonderful.  That kind of thing is easier said than done.

Arya tells Sansa a story that is way too long so she can confront Sansa over her r-gram from Season 2.  The biggest problem isn’t that Arya doesn’t believe Sansa was coerced, but that Arya believes Sansa was stupid and weak.  To be fair to Sansa—even Sansa—Joffrey calling an audible and having Ned beheaded was an enormous cock-up.

Aaaaaand then Sansa brags about the Eyrie’s dramatic entrance after the Battle of the Bastards.  Sansa seems to think that showing up after Jon’s forces were decimated—when he couldn’t hold them back to wait for her, because she didn’t tell him—is a point in her favor.  Yep, Sansa remains the worst.

Tyrion thinks Jon definitely likes Dany.  She complains he is “too little.”  He also, wisely, wants to talk succession, but Dany isn’t having any of it.  Not until she wears the crown.  But planning for her succession now could help her win that crown.

Oh shit, bear fight!  Not just any bear, a zombie bear.  Good thing you have a couple guys around with flaming swords.  After one hell of a fight—during much of which the bear is on fire—Jorah kills him with a dragonglass knife.  Thus confirming that dragonglass kills wights, not just White Walkers.  It’s a good thing they brought all that…shit, Jorah was the only one who remembered to bring any dragonglass, wasn’t he.

And of course Sansa runs right to Littlefinger.  Because. Sansa. Is. The. Worst.  (Though, to be fair, Arya isn’t much better in this episode.)

The Westerosi A-Team ambush a White Walker and a group of wights.  Not only does Jon kill another White Walker, but most of the wights go with it, Myrddraal-style.  Luckily there is one left for them to grab.

But that brings an army of the dead.  After sending Gendry to run back to Eastwatch, the rest of the A-Team are trapped.  The wights can’t get to them over thin ice, but they can’t get away either.  Oh, and Thoros dies, so Beric and Jon are out of spare lives.  Jon wants to wait for aid, but Beric has another idea.  Kill the Night King.

This is actually a pretty good idea that everyone ignores for the rest of the episode.  But let’s keep that in our back pocket.

Dany is taking all three dragons to render aid for Jon (over Tyrion’s counsel).  Yeah, she likes him.  Tyrion has a point about the risks, but maybe that is why it was a terrible idea in the first place?

Before she can get there, though, we get to see the A-Team in action.  The wights finally figure out that they’ve waited long enough for the ice to thicken to the point of allowing at least a trickle to cross.  The fight that ensues is pretty great.  Each team member gets to show off his distinctive weapon and fighting style.  Jon has the Valyrian steel, Beric a flaming sword, Tormund his battle ax, Jorah is dual-wielding dragonglass daggers (which makes more sense than no one else seeming to have one, to be honest), and even the Hound spices things up by using Gendry’s hammer.  It’s an intense set piece, with redshirts dying aplenty and Tormund almost being pulled under the ice, but the wights gave Dany enough time to fly her dragons passed the Wall (uh, they fly really fast, and ice zombies walk really slow).

And just when we’re all releasing our collective breaths…the Night King drops a dragon with a single well aimed magic ice spear.  Dany and her two remaining dragons fly off, leaving Jon behind.

After a tense scene between Sansa and Arya, we learn that Jon survived.  He pulls himself from the ice and is conveniently saved by his undead uncle Benjen, who commits suicide by wight now that his role in the narrative is finished.

Dany sees Jon’s stab wound scars and silently reassesses his position on her personal height/bad boy chart.  He awakens to offer to bend the knee.  Now that one of her children has been killed, Dany is all-in for the fight against the White Walkers.  Oh, and she really doesn’t like the nickname “Dany.”  Sorry.

Conversations are hard to summarize so I didn’t summarize the conversations on the walk from the Wall, but, again, they were really good.

I said something about Jon and Dany on Twitter last week and someone responded along the lines of, of course, it is A Song of Ice and Fire.  Jon being Ice and Dany being Fire.  I’m not sure that Ice and Fire still don’t work better for the White Walkers and the dragons (of course it could be both).  Jon does get a nice Ice association at the end.  Dany has twice survived large fires and is the “mother of dragons.”  Jon survived being stabbed in the snow next to a giant wall of ice and falling under the ice of a frozen lake and has twice killed a White Walker. 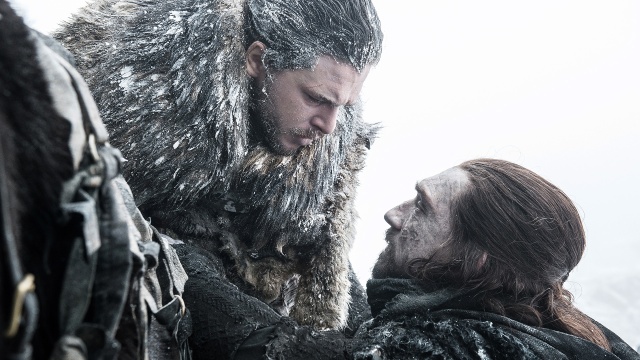 I’ve been saying for a while that Dany would lose a dragon.  Or thinking it.  I really should have put that in a post.  Dany and Jon as dragonriders make a lot more sense than any possible third.  But I thought it would be Cersei who took down a dragon.  Even being spoiled that the Night King raised a dragon, I thought it would be some random dead dragon or an Ice Dragon.

It was a hell of a scene, but its impact was muted.

This has been a good season, but by no means a great season.  The truncated schedule has a lot to do with that, and it really shows in this episode.  The events of this episode were a big flipping deal!  But it just didn’t have the same impact as so many of the penultimate episodes of each season because it lacked the same level of buildup.  And while the chance to see a full solar eclipse was totally worth it, I think watching the episode three days later detracted from the experience as well.

More troubling is that the plot for this episode was largely driven by characters picking up the Idiot Ball.  I’m not talking about Sansa.  A lot of people argued that she was poised to outstrip Littlefinger in political maneuvering.  An assertion without evidence in support.  This episode confirms that Sansa is who we thought she was.  Sometimes it isn’t the Idiot Ball, it is characterization is what I’m saying.

No, I’m more ticked about the expedition north of the Wall.  I hope we can all agree that it was a mad idea from the beginning.  And don’t get me started on Jon running away from Dany and Drogon so he could kill a few more wights.  You would think that fewer episodes would lead to tighter writing, even if it forces the pacing.  But this episode really could have been better with a few simple, minor fixes.

The coming war between and Ice and Fire, between the living and the dead, no longer appears to be such a sure thing.  Not only can the Night King take down a dragon with ease, now he has one of his own.  This should make for an interesting dynamic.  Both armies are much stronger on offense than on defense.  Dany and Jon have dragons and large armies.  But the White Walkers can kill and turn dragons and will very, very quickly start to turn armies of the living into armies of the dead as they move south.  But the White Walkers and wights are vulnerable to dragonglass and dragon fire, and killing White Walkers apparently kills the wights they’ve raised.

I just want to say again how cool the zombie bear was.

It looks like next episode will revolve around the summit between the three sovereigns (four, I guess, if anyone bothered to invite Euron).  I hope Bran or Sam+Gilly are on hand to vouch for Jon’s true parentage and undercut Cersei’s blood and soil spiel next week—Jon doesn’t just have the strongest claim to the throne, he has also lived his entire life in Westeros.  I imagine something will go down.  Weddings aren’t the only bloody affairs in Westeros.

Tormund got all the best lines this episode:

“That’s more important than being smart.  Smart people don’t come up here looking for the dead.”

“You spent too much time with the Free Folk.  Now you don’t like kneeling.”

“How did a mad fucker like you live this long?”  “I’m good at killing people.”

“I want to make babies with her, think of them great big monsters.  They’ll conquer the world.”

Pics courtesy of HBO, as always.