After one of the best episodes of the entire series, are we in for a letdown with a slow episode tonight?  I think not.  I’m hoping for some White Walkers.  Maybe even, if we get really lucky, a dire wolf.

Scheduling update: I will be traveling next weekend and won’t be able to watch the show live.  My recap will go up later that week (maybe Wednesday, but probably not until Friday).

Spoilers are a ladder. 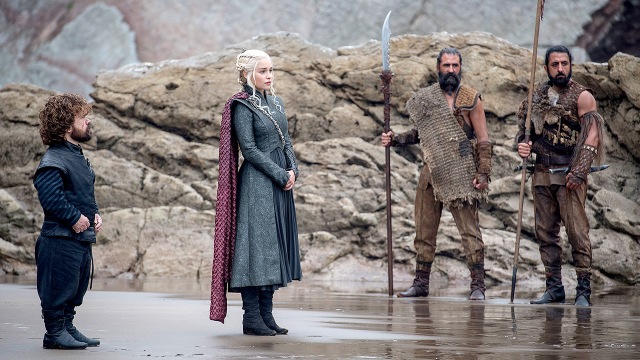 I made the mistake of turning on the end of the last episode while my wife was in the room.  So of course I couldn’t turn it off before it was over.  But hey, it was worth it!  I didn’t miss any of this episode, and I got my wife to watch it with me.

No nudity two weeks in a row!  Maybe I will see that bump in post views this time if I don’t cock up the blog post title again.

We get the answer to a couple questions right off (this season doesn’t screw around).  It was Bronn at the end of the last episode, and he did save Jaime.  It also looks like they will evade capture for the nonce [edited to add: they do].

Dany offers the surviving Lannister and Tarly troops the option of bending the knee or dying.  A few comply immediately, and a lot more when Drogon roars.  Randyll Tarly and the unfortunately named Dickon do not.  Randyll goes all blood and soil, or, well, soil, and denounces Dany as a foreigner.  Tyrion suggests taking the Black.  Randyll responds that she can’t send him to the Wall because she is not his queen, because neither he nor the show writers are familiar with the history of Westeros.  Dickon also refuses to bend the knee, and Dany has Dragon burninate both.  (Other characters who also almost went to the Wall in the books or show: Ned, Theon, Tyrion, Bryden the Blackfish)

That pretty much limbers every knee, but Tyrion is dyspeptic.

Cersei is nonplussed.  They got the Tyrell’s gold, so soldiers can be replaced with mercenaries.  And, regardless, she would rather fight and die than submit and die. 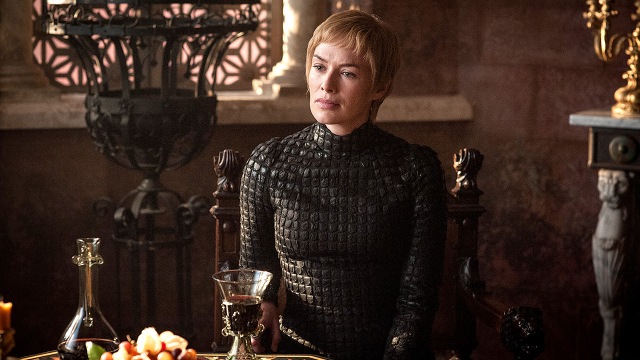 Back at Dragonstone, Dany gives Jon a Maverick-style fly-by, then tries to intimidate him from the ground.  Jon, like a boss, casually takes off his glove and is all, “nice doggy.”  Like a boss.

Jorah returns, and Dany gives him the most friendzone hug ever.

Bran sends a murder of ravens north of the Wall, where they see an army of the dead before being dispelled by the Night King.  He must send a warning south.

The maesters are debating Bran’s warning.  Good thing Sam is there to speak for him!  But he only has personal experience, not tenure, so they don’t listen to him.

Tyrion and Varys debate Dany’s actions.  They’ve forgotten the events of the last six seasons, so they think killing vanquished nobles beyond the pale.  Or maybe it’s just that burninating is Cruel and Unusual punishment.

At the baller Westerosi map table, a heist is hatched.  They will grab a wight and bring it to Kings Landing to convince Cersei of the looming threat.  That Dany isn’t really convinced of?  Seems a bit of a stretch, but Jon Snow is a boss, so Dany lets him go. 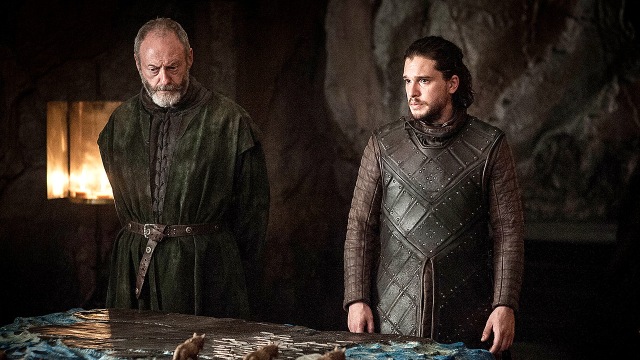 We get tense sibling drama between Sansa and Arya and Tyrion and Jaime.

Davos goes to get Gendry, who is tired enough of rowing and of swinging a hammer to immediately pitch in with Davos.

Jaime passes along Tyrion’s message.  Cersei has bigger news.  She is pregnant again.  This time she wants to be open that the child is Jaime’s.  She assumes people won’t mind, because, seriously, they didn’t mind when she incinerated the Grand Sept.

Back at Oldtown, Gilly is asking about annulments, perhaps concerned about her virtue after leaving Craster.  But she rather importantly mentions that a master granted Rhaegar an annulment and married him to someone else.  This is big!  But Sam, just like a man, isn’t listening.  He does decide to leave Oldtown.

Arya spies on Littlefinger’s maneuvering.  This will end badly for someone.  (I had to stoop to googling to figure it out, but the raven’s message that Arya reads is the one Sansa sent Robb under duress from Cersei in season 1.)

Jon puts together his Ocean’s 6: Jorah, Gendry, Tormund, Thoros, Beric, and the Hound.

On seeing Jon and Dany together my wife immediately commented that they would hook up.  It’s certainly looking that way.  And if Rhaegar properly married Lyanna, then Jon has the best claim to the throne.  A political marriage between the two would make sense (it would still be icky though).

This did wind up being a filler episode, one small bombshell notwithstanding.

There are a couple direct reactions to criticisms of the show: Jon remarking “that didn’t take long” when Dany returns and Davos joking that he thought Gendry might still be rowing.

The lords at Winterfell kind of have a point.  Jon has been gone for months.

I had a loony theory that Gendry would be the Golden Company’s mummer’s dragon and Cersie would arrange a marriage.  I guess that is off the table, but it looks like Gendry does have some role to play.

By the way, can we talk about that war hammer?  That is not what a medieval war hammer is supposed to look like.  It should look more like this: 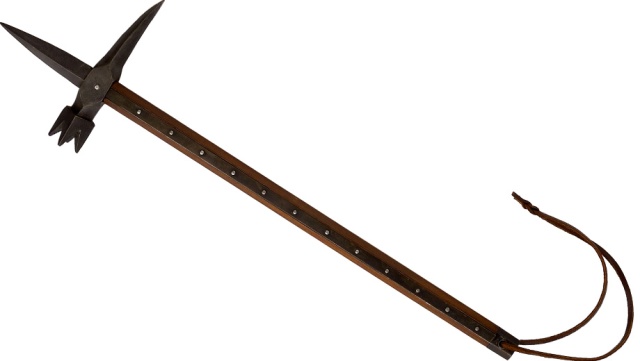 The head should be relatively small to punch through plate armor.  That is the entire point of using a war hammer instead of a sword.  To be fair, though, the war hammer shown resembles the description of Robert Baratheon’s war hammer from the books (although this is a better-looking weapon).

Dany et al.’s gambit doesn’t make any sense.  Let’s run through some of the problems.  It keeps Jon away from Winterfell longer.  It puts Valyrian steel in danger.  You’re sending six of your best men, including the King in the North and the leader at Eastwatch, into danger.  You’re putting yourself between your primary line of defense and a massive army of the dead.  So are they planning to grab an existing wight?  Just some random dead person on the assumption they will come back to life?  Is that the only way to get an ice zombie passed the Wall—to move them before they reanimate?  Will they even reanimate if they are taken far enough away from the White Walkers?  Will they lose the magic that reanimates them if taken far enough away?  Will they decompose at the normal rate for a body if taken away from the cold?  The palaver between Tyrion and Jaime notwithstanding, there is still no guarantee they can get the wight to Cersei.  The mere reanimation of the dead isn’t going to flip her world upside down considering one of her Queen’s Guard is undead.  There is a difference between one wight and thousands.  And even if she buys everything, why wouldn’t she let the White Walkers crush the north before moving?  The woman who brought down the Great Sept isn’t afraid to break a few eggs.

And yet.  That crew?  I’m very excited about seeing Jon, Gendry, Jorah, Tormund, and apparently all that remains of the Brotherhood in action.  It looks like next week will finally be the episode in which the White Walkers return in full force.