Summer of Conan: The Conan Movies

Conan has been given the silver screen treatment three times.  There was also a TV adaptation that I missed, as much as you can miss that sort of thing from what I hear.  Two of the movies starred Arnold Schwarzenegger.  The 1982 version of Conan the Barbarian birthed a boom in sword and sorcery movies.  Conan the Destroyer killed the hopes for a movie featuring Conan as king.  Something they hadn’t given up hope on, last I heard.  The attempted reboot starring Jason Momoa was a flop, but isn’t as bad as its reputation suggests.

The original Conan the Barbarian isn’t just an excellent movie; it was good enough to serve as the catalyst for a minor boom in sword and sorcery movies in the 80s.  Given that live-action traditional fantasy would all but disappear from the cinema in the 90s, I am particularly grateful for that.  It is also the best of the three Conan movies by a wide margin.

The music is epic and one of the all-time great scores.  The cinematography is frequently stunning.  Milius doesn’t treat his subject matter flippantly just because it is masculine; hence great scenes like Conan and Subotai quietly discussing religion over their campfire and Subotai saying that he cries for Conan because, as a Cimmerian, Conan will not cry.  The movie is so primal, and has so many beautiful little artistic touches, that I love it as much as an adult as I did seeing it the first time as a kid.

Conan the Destroyer is kind of delightfully weird.  It has Grace Jones and Wilt Chamberlain!  The story isn’t bad.  There is some good dialogue (“But we didn’t steal everything he had.”  “We didn’t have time.”).  But after the 1982 movie’s off-kilter, auteur brilliance, Conan the Destroyer seems very dull.  It is as influenced by Conan the Barbarian’s lesser fantasy imitators as by the original.  Malak is a very poor man’s Subotai.  The F/X have aged very poorly.  Its great sin is that—unlike the 1982 movie—it doesn’t take its subject matter seriously.  It’s just “tits and dragons,” as Ian McShane would denigrate Game of Thrones (without actually giving us either).  Which probably played some role in the final act of seppuku—making a PG-rated movie instead of an R-rated movie. 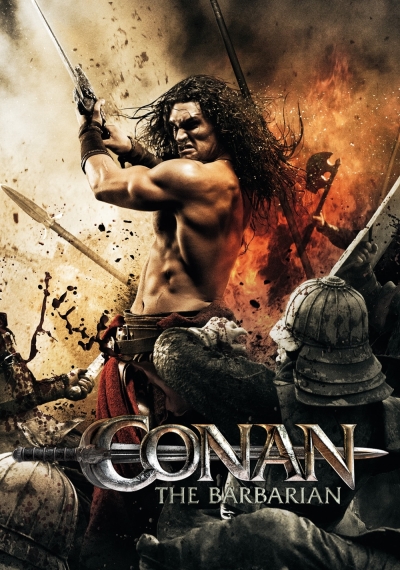 The shadow of the 1982 Conan the Barbarian hangs heavy over the 2011 version.  As it must be.  Conan the Destroyer is best forgotten, and the 1982 version of Conan IS Conan for a generation.  Surely far more people have seen it than have read Robert E. Howard’s original stories.

This movie tries and does get a lot right.  There are nice bits like the reference to Acheron in the opening narrative.  We get to see Conan literally born on the battlefield.  The young Conan here is the sort who according to Howard’s Conan was already the talk of the campfires at fifteen.  The Picts who attack Conan in the opening are a nice mix of historical Picts and the Comanche who so obviously influenced Howard’s depiction of the Picts.  Momoa credibly looks not just physically imposing but pantherish and shows a bit more of Conan’s personality.

But then you have weird stuff like Ron Perleman, caveman.  His death scene is needlessly drawn out.  For a guy who kills four Picts with an egg in his mouth as not quite a man, Conan’s rough edges have been sanded off.  The villain here is as banal as James Earl Jones’ Thulsa Doom was compelling.

More to the point, it doesn’t have the craft of the 1982 version.  I loved that movie from the first time I saw it as a kid.  But rewatching it now with a more practiced eye, I only appreciate Milius’ craft more.  The 2011 movie commits the ultimate sin for a Conan story.  It’s conventional, and Howard’s original stories were never conventional.

Blogs on books at Every Day Should Be Tuesday (speculative fiction) and Hillbilly Highways (country noir and nonfiction). https://everydayshouldbetuesday.wordpress.com/ https://hillbillyhighways.wordpress.com/
View all posts by H.P. →
This entry was posted in Fantasy, Sundry, Throwback SF and tagged Conan, Movie Reviews, Retro SF, Sword and Sorcery. Bookmark the permalink.

17 Responses to Summer of Conan: The Conan Movies