Before we begin, let us take a moment and reflect on how remarkable it is that the biggest show on television is . . . an epic fantasy.  It wasn’t that long ago that we went almost an entire decade (the 90s) without a live-action traditional fantasy movie. 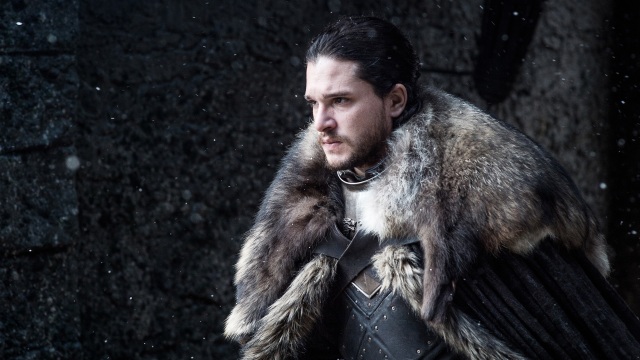 The episode opens with a stormy sea.  Dragonstone.  Good thing Daenerys is stormborn, eh?  Varys informs her that the lords despise Cersie, but Daenerys is smart enough to know that doesn’t translate into support for her.  Perhaps with a black mood spurred by the storm, Daenerys pushes Varys on his loyalty.  He wasn’t entirely loyal to Robert, but still acted against Daenerys.  Varys insists he acts for the benefit of the people.  Any plotting with Illyrio appears to be dropped, for the TV show at least.  Dany and Varys settle back into uneasy alliance.  In the meantime . . . a red priestess.

Yes, it is Melisandre.  Dany points out she cannot be the Prince Who Was Promised because she is no prince, but Missandei points to a bad translation.  The original term is ungendered.  Melisandre seems agnostic on that point, arguing Jon Snow has a part to play and urging Dany to summon him.  She agrees, but she wants him to bend the knee.

Back at Winterfell, the boys and girls are indeed training at arms.  Sansa and Jon are leery of responding to the message, but Davos points out fire dragons could come in handy against ice demons, what with the name of the series and all.

Cersei is not so weak as we may have thought.  Randyll Tarly, and presumably other Tyrell bannermen, are in Kings Landing.  But Tarly isn’t exactly keen on going up against dragons.  Qyburn says they are working on a solution to that particular problem.  Tarly insists he’s not an oath-breaker.  One wonders why he is there, given Olenna has made her choice.

Sam wants to heal Jorah, but Archmaester House shuts him down with some medieval medical knowledge.  Jorah is fucked.

Below the Red Keep, Qyburn points out dragons are not invincible.  He unveils . . . a ballista.  I was expecting a bit more.  But it’s a wise choice.

Daenerys is obviously the strongest sovereign, but her coalition shows cracks.  Dany shuts down the debate—they will lay siege to Kings Landing (no dragons, because they need to win hearts and minds).  We learn that whatever ships they brought, the Dornish troops are still mostly in Dorne.  Yara is to retrieve them so that they have native soldiers to besiege Kings Landing.  The Unsullied will take Casterly Rock.  Never split the party!  Attacking Casterly Rock is a questionable strategic move.  The Lannister forces are depleted and attacking Kings Landing will certainly draw them.  A better move would have been to land on the eastern side of the mainland and start currying support, much like the Golden Company did in the books.

There is a very touching scene between Grey Worm and Missandei.  Then it turns into a sex scene, because Game of Thrones.  Jacob Anderson and Nathalie Emmanuel are very talented young actors.  I hope we see much more of them.  Especially Nathalie Emmanuel.

Sam wants to attempt a dangerous procedure that may cure Jorah.  This is just like when Nynaeve wanted to heal Mat!  [/gratuitous Wheel of Time reference]  The thing that strikes me is that Sam appears to be acting out of loyalty to his old Lord Captain Commander.  But when he tells Jorah that he was with him when he died, Jorah doesn’t give a shit.  He only has eyes for Dany.  Sam carves him up like a nice shoulder of pork barbecue.

Hot Pie sighting!  Arya and Hot Pie discuss the finer points of pie making.  Crazily, Arya just now learns that Winterfell is once again in Stark hands.  She leaves before Hot Pie has a chance to bake her any wolf bread.  A little indecision and she’s headed back north.  The North Remembers.

Jon announces that he will travel to Dragonstone.  They need dragonglass.  And allies.  Sansa again speaks against Jon, because she remains the worst.  Lord Glover has the better point—he may be making the same mistake Robb made.  Lady Mormont stands, and for once doesn’t punk Glover.  The King of the North belongs in the North.  But an army of the dead approaches.

In the crypts, Littlefinger tells Jon that he loves Sansa . . . as he loved Jon’s mother.  Jon doesn’t take it well.  I doubt better knowledge of his family tree would make much difference.

Last week’s preview hinted at the return of Arya’s long lost direwolf, Nymeria.  Now Arya’s horse gets skittish at a lonely campsite.  Wolves surround her.  Led by a wolf that no shit is as tall as Arya.  Arya recognizes her and puts down Needle.  She asks Nymeria to come with her to Winterfell, but Nymeria demurs.  Call of the Wild and all.  Arya is just happy that Nymeria found a good family.

The episode ends with a sea battle.  Euron has intercepted Yara’s fleet.  Two of the Sand Snakes attack and injure Euron, but he kills them both.  Ellaria Sand and Yara are captured.  Theon flees.

My SlingTV crapped at as soon as the credits rolled, so I missed the preview for next week’s episode.  But given Sling’s usual performance for The Walking Dead, I’m happy with it thus far.  I had better be; I’m paying almost as much for HBO as for every other channel combined.

The sea battle wasn’t the most shocking development.  (1) Dany was foolish to divide her forces.  (2) An early pic from the set appeared to depict Ellaria and Yara being paraded through the streets of Kings Landing.  I hate spoilers.

It was a nice little sea battle.  It was bloody and hectic without descending into gorn or incomprehensibility.  Robert E. Howard would be proud.  It also looked great, in the dark with fire and sparks everywhere.  The action takes place entirely on one ship, but they did a nice job suggesting the sweep of the battle while showing very little.

With no dragons or White Walkers, they should have saved some money on F/X.  Unless they spent it all on Nymeria.  They didn’t even have to render the Wall, despite Castle Black showing up in the title sequence.

The entire sea battle was a little contrived.  How did Euron find them?  How did he—even in the fog—get catapults (with flaming ammunition!) firing before anyone spotted them?  Did they set no watch at all?  But I’m willing to overlook it.

Apparently there was somebody at Dragonstone, since Tyrion was able to send Jon a raven.

I’m looking forward to Jon meeting Dany, although there is the potential for a lot to go wrong (and it will; let’s be honest, this is Game of Thrones).  I really wish we had seen Bran now.  I’m less worried about what will happen to Jon on Dragonstone than what Sansa and Littlefinger will get up to in his absence.  Sansa update: still the worst.  Jon conferred with her before making his decision.  She needs to understand that it is still his decision.  And neither of them is doing the least thing to counter Littlefinger.

In season 6, the High Sparrow had enough sway that they feared acting against him directly.  Cersei killed him and his disciples, destroyed the seat of the church in Westeros, and killed any number of nobles and no one says boo.  Never let anyone tell you Game of Thrones is more realistic than other fantasy series.

Things just got a lot more dangerous for the good guys, as they must.