Review of Arena by Holly Jennings

Arena is entirely too good to be a debut novel, but debut novel it is.  Arena is a set in a relatively near future—just a few decades from now—where full-immersion virtual reality has led to pro gaming leagues and the biggest new TV sport since poker.  Pro gamers aren’t just professionals, they’re celebrities.  And Kali Ling—The Warrior—is bigger than most.  The preseason is almost over and her team is poised to enter the national championship tournament in a 5-on-5 arena battle game as the team to beat.

It immediately all starts to fall apart.

First, Kali’s team gets steamrolled in the final preseason match.  And it may be the “preseason,” but the loss still puts them in the losers’ bracket for the coming double elimination tournament (this won’t be the first time I suspect Jennings is more of a gamer than a sports fan).  Then Kali wakes up to find beside her her teammate and sometimes lover Nathan dead from an overdose.  She immediately clashes with the gamer they bring in to replace Nathan and she begins to have addiction problems of her own.  Oh, and through all of this her team needs to fight through the losers’ bracket with no margin for error, lest they lose their sponsors and their shot as pro gamers.

Arena is science fiction—it’s set a few decades in the future, it’s about tremendous advances in gaming, etc.—but the VR allows Jennings to do some different things for the genre.  How often in modern science fiction do you see someone take a sword to the gut?  Get their face split open by an ax?  As the name suggests, Kali and her team compete in “arena” matches.  Each 5-person team must protect their own tower and try to seize the other team’s tower, with team members assigned to defense, offense, or the middle, but it always seems to come down to a little indiscriminate slaughter.  We get a lot of wonderfully brutal hand-to-hand combat action sequences (the players all fight with swords, axes, daggers, etc.).  Just like the gladiators did, only if you lose you come back to life and have to survive a press conference.

It’s full immersion VR, and what you can do in real life is what you can do in the game.  At first, gamers weren’t athletic enough.  Athletes turned out not to have what it took either.  So by the time of our story, the pro gaming leagues are dominated by serious gamers who are also elite athletes, and probably have a black belt or three thrown in.  And it’s not just physically demanding.  It’s mentally and emotionally demanding because it’s so real.  Arena spends a lot of time on the psychological demands of the sport (although not, oddly enough, on the effect of constantly killing people in such a realistic fashion). 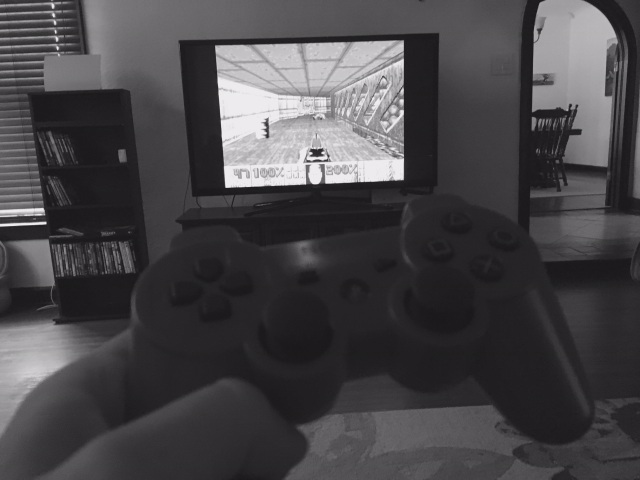 In the world of Arena, everything from Nintendo to today’s games and on further are “classic.”  I was inspired to pull out a classic.

Arena is told entirely from Kali Ling’s perspective.  There is a lot riding on her story, narratively and in-world, and she carries both.  She is thrust into a leadership role—a heavy burden for a 20 year-old relative rookie to professional gaming in a male-dominated sport—and the pressure gets to her.  It’s not the drugs—“Power-up, 1-up, mana potion, auto-aim, cooldown, critical hit,” or just “HP, which in gamer speak stood for health points.”—well, it’s not just the drugs.  It’s virtual reality itself.  Like I quoted at the beginning: “Nothing like seeing your own insides to make you feel mortal.  Nothing like coming back to life to make you feel like a god.”  How can real life compete with that?  Especially when that real life involves a dead lover and a obstinate, just impossible new teammate.

Kali is such a great character.  She’s young enough to still be unsure of her place in the world but old enough to do something about it (YA fantasy and sci fi about teenagers is huge these days; how about some more fiction about twenty-somethings?).  She’s a badass, and she knows it.  She would probably call herself a Deadpan Snarker, but she’s kind of just a jerk.  She’s wilful to a fault.  She’s Rand al’Thor-esque in her leadership at first.  She makes a lot of really terrible decisions.  It’s a testament to Jennings’ skill as a writer that, for all that, Kali remains likeable, interesting, and, most importantly, someone I cared about.

Kali’s foil, of sorts, for much of the book is her new teammate, Rooke.  Rooke is really good looking.  Like, ridiculously good looking.  We know because Kali thinks this about him.  A lot.  He’s stereotypically tall, dark, and handsome but not stereotypically debonair.  We don’t see a lot of taciturn characters in fiction.  It works here, in part because we’re in Kali’s head and get to see her continued reactions to Rooke and in part because he eventually opens up and we learn more about him.  He’s a wonderful character in his own right with pain of his own, but he winds up being very much the driving force pushing Kali along in her journey as a character, whether intellectually by dropping books (real physical books!) on Chinese philosophy on her doorstep or physically in the training room.  The former also allows Jennings to highlight some of her themes.  Rooke is into Chinese philosophy and Kali is half-Chinese but has abandoned the Daoism of her youth.

I only have a couple gripes.  Jennings is obviously more a gamer than an athlete.  The promo aspects make sense, but why would you encourage your athletes to take shots and drugs like the owner of Kali’s team does?  Despite having an elaborate facility with trainers, a cafeteria, etc., the players’ don’t appear to have any sleep schedule or “training table.”  Kali spends most of the book not sleeping and skipping breakfast without drawing real attention.  My other gripe is that the central conflict of the book—Kali’s internal conflict—is resolved too soon.  The external conflict of the games isn’t enough to sustain the momentum for the rest of the book.  But all in all, it’s a tremendous debut that doesn’t come off like a debut.

Disclosure: I received an advance copy of Arena through NetGalley.

Blogs on books at Every Day Should Be Tuesday (speculative fiction) and Hillbilly Highways (country noir and nonfiction). https://everydayshouldbetuesday.wordpress.com/ https://hillbillyhighways.wordpress.com/
View all posts by H.P. →
This entry was posted in Book Reviews, Science Fiction and tagged Ace Books, Cyberpunk. Bookmark the permalink.

5 Responses to Review of Arena by Holly Jennings