I published a post on the controversy surrounding CTRL ALT Revolt! on Monday.  I covered a lot of why I loved CTRL ALT Revolt! in that post so I won’t belabor the points here.  But there was a lot I didn’t talk about as well.  The bottom line is that CTRL ALT Revolt! is a pop culture laden cyberpunk with a biting wit where the fight is as much in MMORPGs as in meat space.  It’s a nice twist on the usual dystopian apocalypse brought on by the rise of the machines. 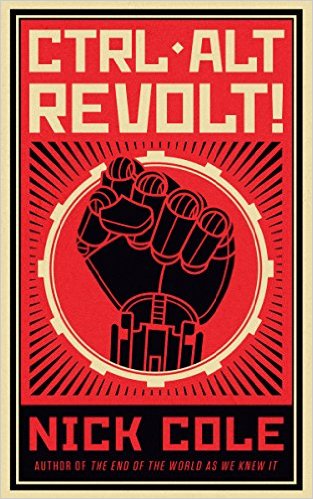 CTRL ALT Revolt! takes place not too long from today.  If it’s true that political punditry is only capable of projecting in straight lines, with no provision for exogenous events, the same could be said for dystopian fiction (or at least certain types).  But that’s ok, for reasons I’ll address later.  For now, the point is it’s all More Dakka.  More government, more reality TV, more social justice at the expense of actual justice and common sense.  The one good thing?  Some really, really cool fucking sounding games.

It’s those games that bring us our two main protagonists.  Mara is blind and has cerebral palsy, but all she wants is to work and take care of herself.  In a world that denies her that opportunity, her solace is in StarFleet Empires, i.e., MMORPG Star Trek, where she commands a starship.  I went on at length in my earlier post on how much I love Mara’s character.  That’s a good thing.  Along with the strength of the in-game action, that is what sells the reader on Mara’s storyline long before its relevance to the bigger picture is revealed.

The other main character is Ninety-Nine Fishbein (his parents were into Occupy), better known as Fish.  He just got his big break selling his MMORPG Island Pirates to the book’s Microsoft, etc. expy WonderSoft.  Island Pirates is a game I want to play right now.  It’s a game about “making stuff from scratch or finding something on your own” instead of “the everything’s-brand-new-and-get-stuff-from-Big-Government” (I get the nostalgia for bag when we actually made stuff to last and fixed it when it broke, but I’m partial to Coasian bargaining myself).  Oh, and piracy.  Which is more fun outside of meat space (Fish should perhaps not have been surprised that his game attracted virtual jihadis (i.e., the Islamic State Inside the Internet, or ISII) with usernames like SonOftheCaliphate, SexyHeadChoppa, and BloodyCrescentBrutha).  Anyway, the game is just in beta now, but after pocketing a cool $75 mil, Fish is ready to settle into the life of a star developer for Wondersoft at their luxury palace/company town Twisted Pine Falls.  And it gives Cole the excuse to break out great usernames like Fishmael and MagnumPIrate.

There is also a vain actor/gamer Jason Dare who is the modern Captain Kirk and a bartender/LARPer with more than a passing resemblance to Bruce Campbell and a LARP costume that includes a working chainsaw arm and a working sawed-off double-barrel shotgun.

More arresting, though, is the villain.  This is a story of AI gone rogue, but it’s not just one AI, it’s a committee.  Which is, admittedly, destined to go as badly as ever other committee.  But it makes things interesting in the interim.

The story proceeds in two main threads.  In one, Mara has been commissioned in StarFleet Empires to deliver a courier into dangerous space and soon finds herself in Jason Dare’s crosshairs.  In the other, Fish and everyone else in a largely abandoned WonderSoft complex find themselves under siege by drones and other robots.

It’s all wonderful stuff.  The action at WonderSoft is fantastic, and there are several strong bit players I haven’t mentioned.  I love Mara’s character, and that along with some solid video game action sequences kept my attention when the point of that plot thread was obscured.  The abortion hook and the rest of the satirical barbs helped grab my attention before I got to know the characters.  Cole’s prose doesn’t sing, but once you’re in for the story it hums along smoothly and speedily.  His take on an AI revolution is interesting, and he takes seriously the obstacles an AI revolution would face in not only ending humanity but providing for its own future. (e.g., the AIs are realistically constrained by their need to keep the power grid functioning).

The politics are never central to the story—they could have been dropped entirely, although that would have made for a more boring book—but they are a highlight.  Cole is free with his razor sharp wit.  Subversive books simply aren’t offered for sale in a world of books dominated by Amazon.  When governments collapse corporations step up to restore order and help the people (see corporations providing clean drinking water in Flint after the failure of government to provide the same).  A blogger ginning up outrage over strokes supposedly due to the graphic horror content of Serial Killer, the Game by calling it the “The Digital Black Plague” is met with his own outrage for the racism of using the word “black.”  A planned moon colony gets axed after “one of the U.N. colony planners had made some disparaging remarks about the trans-person leader of Moon Base Prime’s construction team” and replaced with sensitivity training.  There are fine dispensing misdemeanor-level Micro-Aggression Courts (hey, at least they’re misdemeanor-level).

Do I think any of this will occur?  Remember what I said earlier about (some) dystopian fiction projecting everything out in a straight line?  It’s not a realistic assumption.  Every movement provokes a reaction.  But a straight line projection can show internal incoherence.  So dystopian fiction can itself play a role in that reaction.  It can also magnify issues.  It is not realistic, for example, that productive members of society will respond to over-taxation and over-regulation withdraw en masse and move to Galt’s Gulch.  But it is realistic, and for the same reasons, for productive members of society to move from California to Texas.  And they are.

CTRL ALT Revolt! isn’t perfect—the ending is a bit confusing and abrupt, for one—but it is damned near close.  Highly recommended if you grok the sub-genres.

Disclosure: Cole provided me with a review copy of CTRL ALT Revolt!

Blogs on books at Every Day Should Be Tuesday (speculative fiction) and Hillbilly Highways (country noir and nonfiction). https://everydayshouldbetuesday.wordpress.com/ https://hillbillyhighways.wordpress.com/
View all posts by H.P. →
This entry was posted in Book Reviews, Dystopian/Apocalyptic and tagged Apocalyptic, Cyberpunk, Dragon Awards, Indie Books. Bookmark the permalink.

7 Responses to Review of CTRL ALT Revolt! by Nick Cole