Review of Star Wars: Return of the Jedi

I continue with my quick hit reviews of the Star Wars movies.  My reviews of A New Hope, The Empire Strikes Back, Attack of the Clones, and Return of the Jedi are here, here, here, and here, respectively.  Again, I’m watching in the Machete Order, so I’m re-watching Return of the Jedi after watching the first two movies from the original trilogy and then the latter two prequel movies.  I’m watching The Force Awakens in less than an hour (!!!) and hopefully will get a (non-spoiler) review up tonight. 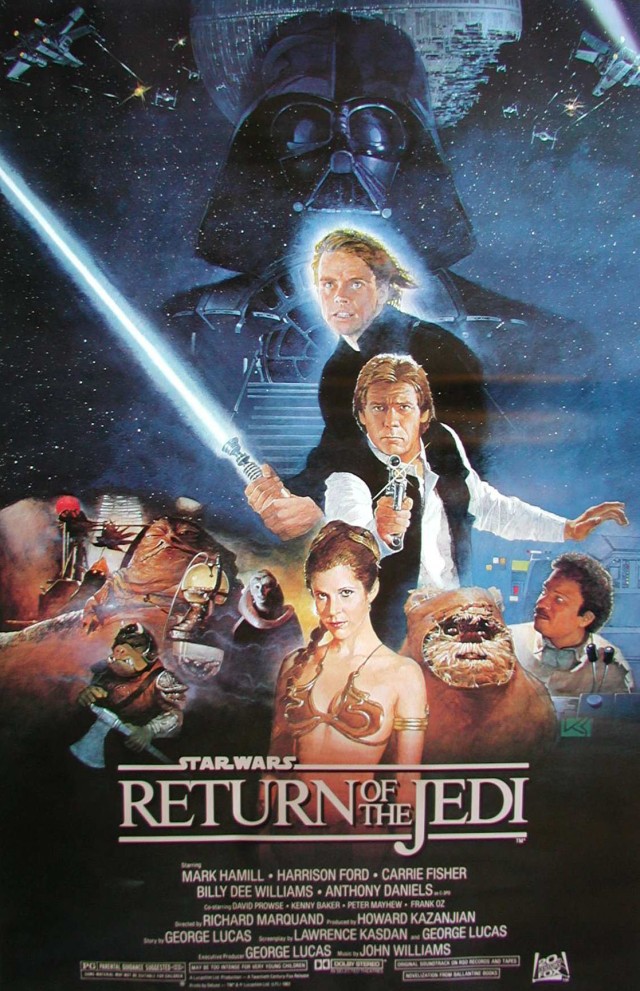 The entire Jabba the Hut sequence is still my favorite from the entire series.  From Jabba himself to his sadistic, never-ending party to temporary-detainee Leia (if you will allow me to get all heteronormative for a minute) to the Bantha that looks like it’s out of Jabberwocky to “Good, I hate long waits” to the sarlacc pit.  Leia, never the damsel in distress, is right in there with the rescue attempt and ends Jabba.  One of the goblins from Labyrinth rips C-3PO’s eye out with his teeth (we’ve all wanted to).  And most of all Luke as the badass the trilogy has being building him into the entire time.  Heroic science fantasy gets a bad rap these days, but it’s all earned here.  And it results in an action sequence that far outstrips any from the prequels.

The speeder bike scene might be the second best action sequence of all the movies.

I even like those man-eating little bears.  Both are furry, but that is about all Ewoks and Wookies have in common.  The original plan of using Wookies would have dramatically changed the nature of the story.  I prefer the plucky insurgency of pygmy indigens helping topple a galactic empire.  The battle with the Ewoks is a pretty good action scene too, and the Ewok realizing his confederate is dead is one of the more poignant moments of the series.

Luke, like Rand al’Thor, succeeds where his predecessor failed because he was raised better.

I think it’s the best looking of the movies.  The FX are noticeably better than in the first two movies and it doesn’t have the visual dissonance and crappy CGI of the prequels.  And it’s the most quotable of the movies.

Blogs on books at Every Day Should Be Tuesday (speculative fiction) and Hillbilly Highways (country noir and nonfiction). https://everydayshouldbetuesday.wordpress.com/ https://hillbillyhighways.wordpress.com/
View all posts by H.P. →
This entry was posted in Science Fiction, Sundry and tagged Movie Reviews, Space Opera, Star Wars. Bookmark the permalink.

3 Responses to Review of Star Wars: Return of the Jedi