Review of Star Wars: Attack of the Clones

I continue with my quick hit reviews of the Star Wars movies.  My reviews of A New Hope and The Empire Strikes Back are here and here, respectively.  Again, I’m watching in the Machete Order, so I’m watching Attack of the Clones and Revenge of the Sith before re-watching Return of the Jedi. 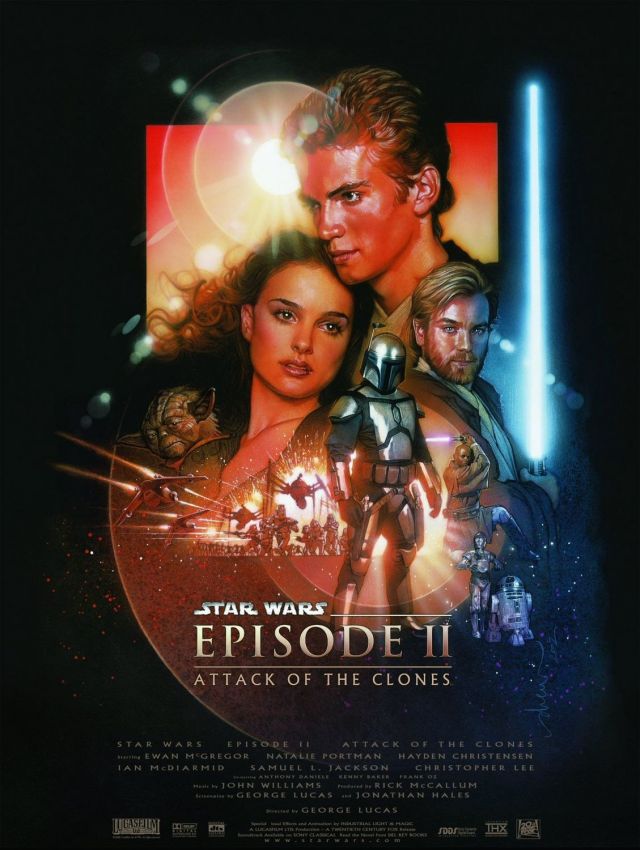 Attack of the Clones wasn’t as bad as I was expecting, as people make it out to be, or as bad as  The Phantom Menace.  Interestingly, what it suffers from most of all, I think isn’t too strong a hand by Lucas, but its time.  The action scenes are overlong, as they invariably are in modern blockbusters.  As is the movie itself, as they tend to be these days.  The CGI often looks bad, sometimes terrible.  But in those days CGI both wasn’t as good as it is now and directors frequently leaned too heavily on it a decade ago (the Lord of the Rings movies have the same problem).

More specific to the movie, the “look” is off.  It looks more like a prequel to Jupiter Ascending than Star Wars.  The “side plot” involving the clone and droid armies is incoherent.  Jar Jar is still there (I was told there would be no Jar Jar!).  The Anakin-Padme romance works, but it’s hobbled by bad dialogue.  Hayden Christensen’s acting isn’t great, but I think Ewan McGregor is the real problem.

Issues with “feel” and length notwithstanding, the film is slick and frequently visually arresting.  E.g., Count Dooku’s mag-sailed ship, the mantis animal set to “execute” Young Man Kenobi, and, most of all, the waterworld where the clones are created (now if all of the clones had been Kevin Costner—THAT would have been scary).  The clone and droid armies are a cool concept.  The second assassination attempt had my stomach in knots.  Jango Fett gets more to do than Boba Fett ever did in the original trilogy.

Blogs on books at Every Day Should Be Tuesday (speculative fiction) and Hillbilly Highways (country noir and nonfiction). https://everydayshouldbetuesday.wordpress.com/ https://hillbillyhighways.wordpress.com/
View all posts by H.P. →
This entry was posted in Science Fiction, Sundry and tagged Movie Reviews, Space Opera, Star Wars. Bookmark the permalink.

3 Responses to Review of Star Wars: Attack of the Clones