Review of Lord of Chaos by Robert Jordan

Caps the Finest of Four Acts in The Wheel of Time

Lord of Chaos is book 6 of 14 in Robert Jordan’s Wheel of Time series. It is considered by many fans of the series as the best of the lot. In my mind it falls just behind The Shadow Rising, but I think it’s the second book in the series (tentatively). Lord of Chaos also marks the finest of the four acts that The Wheel of Time comprises. 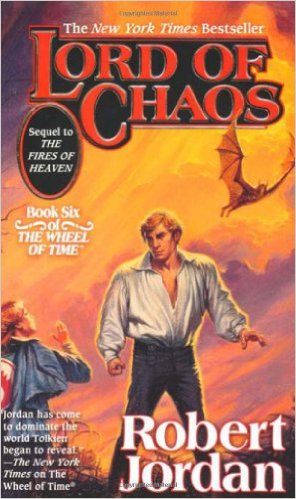 Nynaeve, Egwene, and Perrin, in limited action, all have Crowning Moments of Awesome. Rand’s slipping sanity continues to become a major theme. Rand’s journey is as dark, and as good, as it gets in The Wheel of Time. The city of Ebou Dar, one of the richer cultures in the series, is introduced and featured heavily.

But not all is well with the world (of Wheel of Time characters). Elayne, shortly after it is made clear she knows less about leadership than a village wisdom despite being raised a princess (probably unsurprising given the historical success of hereditary nobility as providers of the aristocracy), sets forth on her 7-book-long mission to demonstrate her firm grasp of the negative use of power while contributing absolutely nothing to the saving of the world most of the other “good” characters are busy with. Perrin and Faile make it into this book, but only barely. Considering where their characters go in the next 7 books, perhaps we should be grateful. But all of that is only hinted at here, whatever drag it will be on the later books. What screen time Perrin does have in this book, he really makes count.

Lord of Chaos has one of the finest climaxes in the series. Not only is a great action sequence, but it brings a tremendous emotional weight and its ramifications reverberate through the rest of the series. It changes the world of the series.

Book 6 is, I think, a good place to put the series down if you’re no longer feeling it. The Wheel of Time remains the same kind of massive, sprawling story with dozens of different players maneuvering against each other for the next four or five books without significantly moving the story forward. Not that it’s not still good, because I very much think it is, but if you’re going to get that much of something you better like it and that sort of thing is better done in book 6 than anywhere else in the series.

Lord of Chaos has the worst of all the hardback cover art, looking like something better suited for a bad romance novel.

Blogs on books at Every Day Should Be Tuesday (speculative fiction) and Hillbilly Highways (country noir and nonfiction). https://everydayshouldbetuesday.wordpress.com/ https://hillbillyhighways.wordpress.com/
View all posts by H.P. →
This entry was posted in Book Reviews, Fantasy and tagged Epic Fantasy, Reread, Tor/Forge, Wheel of Time. Bookmark the permalink.

1 Response to Review of Lord of Chaos by Robert Jordan