Review of The Martian

The Martian is a great damn movie (sorry, like scientists, I have been known to use salty language).

The Martian is a much more complex story than suggested by the trailer (which I thought was masterful). Most notably, Jeff Daniel’s character isn’t the villain he’s made out to be in the trailer. Although, let’s be honest, he had that coming for doing all those commercials trying to convince people to move to Michigan. He’s a damn hero most of the movie. When he does take a heel turn, it comes off feeling false and that, and the reaction, are about the only place where the movie missteps.

But all in all, the trailer does a good job summarizing the basic plot. Mark Watney is a botanist on a manned-mission to Mars. The mission is aborted when an enormous dust storm threatens to destroy their temporary structure on the ground (the Hab) and knock over their rocket out of there. They lose Watney to flying debris and depart under extreme time pressure, thinking him dead. Watney survives and has to face: (1) surviving on Mars with limited supplies, (2) contacting someone to let him know that he’s alive, and (3) and getting off of the planet somehow.

(The title is never dropped, but it’s suggested when Watney’s alma mater, the University of Chicago, send him an email pointing out all it takes to technically colonize somewhere is to plant crops, to Northwestern’s chagrin.)

As to the first problem, the Hab is only designed for a month, but they stocked it with twice the food they would need, and with just Watney left, he has a year of food. But it will take four years to get a mission to him. Watney is able to stretch his rations with the help of Thanksgiving potatoes and human shit. The farm boy in me cheers. Shit doesn’t get enough credit these days.

As to the second, Cameron Howe is on satellite monitoring duty and spots an anomaly—the rover has moved. Once they know he’s there, they can watch him but still can’t communicate. Watney has a plan for that—he digs up the original Pathfinder probe. 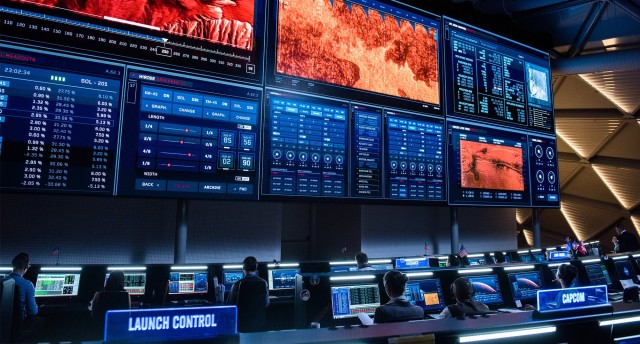 The rest of the movie is concerned with the third problem. There’s a lot to it: they have to rescue Watney before he runs out of supplies, he has to find a way to get into orbit, and they have to get someone to him. Oh, and avoid a public relations disaster in the process, NASA being a public relations outfit with a large space division.

The Martian starts off fast with the storm that leads to Watney being left. It’s a closely run thing for the rest of the astronauts to escape before their rocket falls over. And Watney wakes up with a piece of antenna sticking out of his torso (it punctured him communication unit, hence why his crewmates had no sign he was alive) and has to perform some quick, impromptu self-doctoring. The rest of the movie subsides mostly on tension until the big rescue attempt at the end.

It’s an all-star case, but that doesn’t always translate into a quality movie. Here it does, and some of the smallest roles standout, especially Michael Peña and Donald Glover. But this is really the Matt Damon show, with most scenes only featuring him. The movie has to live or die by Damon’s acting, and he nails it, expressing considerable emotion non-verbally. The movie dwells on Watney’s isolation long enough to convey the claustrophobia and loneliness, but not so long as to rob the movie of momentum (humor helps). One could argue this aspect deserves more attention—it’s no Cast Away—it’s much more focused on Watney solving technical problems (and he has communication abilities Tom Hanks’ Chuck Noland never had).

Damon is known for his acting.

The Martian’s two great strengths, though, are its humor and its unabashedness about its love for science. The Martian is everything science fiction should be (and Interstellar should have been but wasn’t quite). And there is no reason why it can’t make for great fiction. What is fiction, after all, but presenting the protagonist with a series of conflict to be surmounted? Problems can be math problems, same as any other. There could be an accessibility problem, but the filmmakers are deft enough not to lose the scientifically illiterate like me, in part through the one-liners Watney and his crewmates constantly drop. Youths get a bad name for being snarky, but The Martian is proof positive that snark need not be counterproductive. Watney’s sometimes dark humor allows him to keep perspective and stay sane and never distracts him from work on the problem at hand.

It’s a great movie and, I think, has to be considered a lock for a Hugo nomination along with Ex Machina and Mad Max: Fury Road.

(I haven’t read the book, although I understand the movies hews closely to it. This includes the narrative device of telling much of the story through Watney’s video diaries.)

8 Responses to Review of The Martian